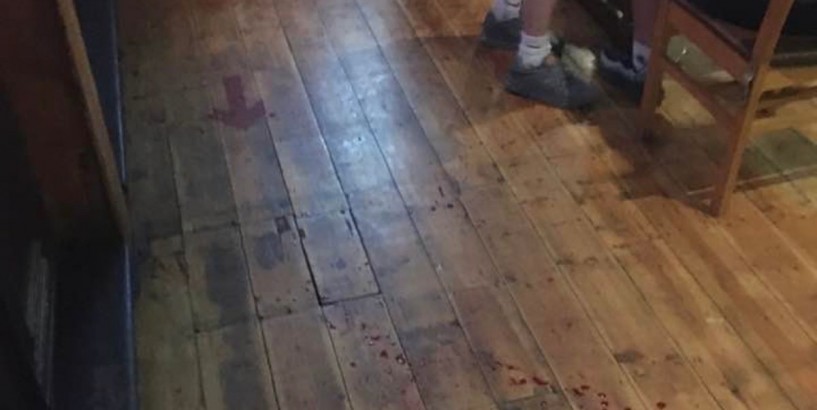 News Three in hospital after 'machete attack' at London pub leaving blood on floor Three males, believed to be in their teens and early 20s, have been rushed to hospital following reports of a stabbing in Abbey Wood. Police have said their injuries are not thought to be life threatening Share (Image: UK News in Pictures (UKNIP))

Three people have been rushed to hospital after reports of a machete attack at a south-east London pub.

A London Ambulance Service spokesperson told the Mirror Online three patients were treated at the scene in Wilton Road, Abbey Wood, after an emergency call at 10.05pm on Monday.

Two were taken to a major trauma centre and one to hospital.

The incident is thought to have happened at or near the Abbey Arms pub with photos emerging showing blood on the floor near social distancing markers.

One witness claimed a gang of men with machetes attacked a smaller group.

It added: "At this stage Injuries not thought life-threatening."

No arrests have been made, with a crime scene still in place.

In response to the incident police have been granted additional search powers under section 60 until 2pm on Tuesday, July 21.

Witnesses or anyone with any information is asked to call police on 101 and quote reference 8556.

The ambulance spokesperson said: "We were called at 10.05pm on Monday, 20 July to reports of a stabbing on Wilton Road, Abbey Wood.

"We dispatched an incident response officer, three ambulance crews, two advanced paramedic practitioners and a medic in a car. We also dispatched a team from London's Air Ambulance by road.

The incident came hours after a separate assault in Mitchum, south London, in which a man in his early 30s presented himself to hospital in a critical condition.

An investigation is under way after the apparent stabbing, police said.

Scotland Yard confirmed in a statement officers were called at 5.30pm to reports of an assault on Upper Green East.

They were unable to find the victim before the man appeared at hospital.

Another section 60 order granting police additional stop and search powers is in place for the whole of Merton borough until 7am on Tuesday.

Police said at "this early stage, there have been no arrests" and their enquiries continue. DailyMirror