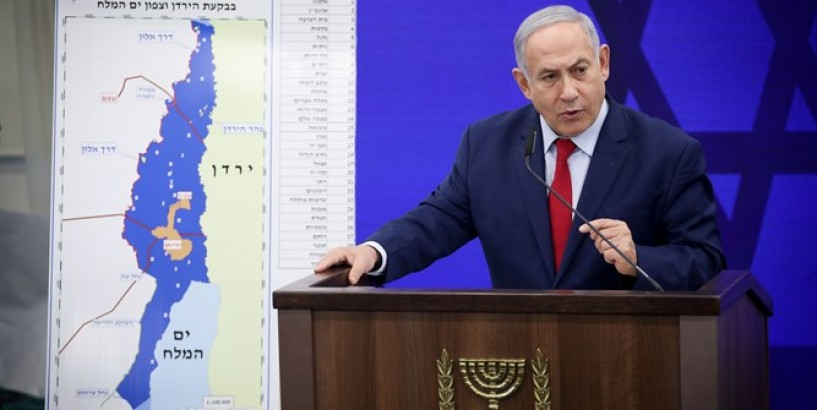 Netanyahu with Jordan Valley sovereignty map Flash 90 A number of Arab states allied with the US are quietly backing Israel’s plan to apply sovereignty over nearly a third of Judea and Samaria, despite officially opposing the move, senior Arab officials say.

Israeli Prime Minister Binyamin Netanyahu, who had vowed in September to apply Israeli sovereignty to the Jordan Valley and Israeli towns in Judea and Samaria, immediately endorsed the Trump plan.

Officially, moderate Arab states allied with the US including Jordan, Egypt, the United Arab Emirates, and Saudi Arabia opposed Israel’s sovereignty plan, with a number of Arab leaders issuing condemnations of or warnings against its implementation.

"Netanyahu's claims that Arab countries accept the annexation are a distortion of reality and of the Arab position," said UAE Foreign Minister Abdullah bin Zayed .

"One-sided annexation in the West Bank of Israel would violate international law and would severely impair international efforts to achieve a political settlement in the Middle East."

“Leaders who advocate a one-state solution do not understand what that would mean. What would happen if the Palestinian Authority collapses? There would be more chaos and extremism in the region. If Israel really annexed the West Bank valley in July, it would lead to a massive conflict with the Hashemite Kingdom of Jordan,” King Abdullah II said in an interview earlier this month with Germany’s Der Spiegel newspaper.

When pressed to explain what steps Jordan would take if Israel does apply sovereignty to parts of Judea and Samaria, Abdullah refused to specify whether his country would cancel the 1994 peace treaty with Israel, but said that all options would be considered.

But behind closed doors, Arab leaders have struck a very different tone, either reconciling themselves to Israel’s sovereignty plan – or even supporting its implementation.

According to a report by Israel Hayom Wednesday morning, senior officials from Jordan and Saudi Arabia say that in many cases, moderate Arab states’ official opposition to the sovereignty plan is simply for show, and that in private talks with Trump administration officials, they either accept or even back the plan.

“Jordan will continue to voice its public position against the annexation plan, primarily through public declarations by the prime minister and the foreign minister…but the King will permit the annexation to go through with a minimum amount of damage to Jordan’s interests,” a senior Jordanian official told Israel Hayom .

“King Abdullah gave a speech a few days before Jordanian Independence Day, and spoke about the great achievements of the kingdom since its establishment, and about Jordan’s success in stopping the spread of the coronavirus pandemic inside of Jordan.”

“The one thing that the King didn’t mention in his speech – not one word about it – was Jordan’s official position on the annexation of the Jordan Valley and parts of the West Bank.”

“Even in his interview with the German newspaper the King refrained from saying that annexation would lead to the termination of the peace treaty with Israel, and there are a few reasons for his silence on that matter.”

“If Jordan suspends or cancels the treaty, it would hurt Jordan’s position as the custodian of Islamic holy places in Jerusalem. Add to that the fact that the King prefers to see Israeli army forces on his western border, rather than Palestinian or international forces.”

“The official position of all the Arab world is against any process which seems to harm the rights of the Palestinians to form an independent state or Palestinian national interests,” the official said.

“That being said, the Palestinians have to understand that the whole world and especially the Arab world have gone through a great deal of changes since the ‘Three No’s” summit in Khartoum,” referring to the August 29th 1967 Arab League summit in Sudan in which the League’s members vowed “no peace with Israel”, “no recognition of Israel”, and “no negotiations with Israel”.

“Israel’s existence and recognition are already existing fact. With all due respect to the tens of thousands of Palestinians living in the Jordan Valley, Arab states like Saudi Arabia, Egypt, the United Arab Emirates, and Jordan will not risk their ties with the Trump administration over them.”

“Our feeling is that Trump will win reelection and continue on for a second term. The Palestinians weren’t wise enough to take advantage of a government as supportive as the Obama administration, and they kept refusing [to negotiate], so the time has for Abu Mazen [Mahmoud Abbas] and the old guard in the leadership who advise him to wake up and understand that world interests and regional interests have changed. If they miss another opportunity for an independent, sovereign state next to Israel because of the annexation of the Jordan Valley and some of the settlements, they will spend the next 20 years with nothing.”

A senior Egyptian security official said that the conflict between Arab states and Iran, as well as the de factor partnership with Israel against Tehran, outweighs Palestinian Arab opposition to Israel’s sovereignty plan.

"I do not think the King wants a Palestinian state in Judea and Samaria. He would also lose his position as guardian of the holy places in Jerusalem, a status that wasn't compromised in the Deal of the Century. This issue is very important to them as the royal family as they consider themselves descended from Prophet Muhammad. Beyond the fact that the King's grandfather was murdered by a Palestinian on the Temple Mount. All these things are well known to King Abdullah."

Ben Menachem also claimed that "there was a secret message from the King to Israel through the defense establishment even before the King came out in an interview with Der Spiegel ."