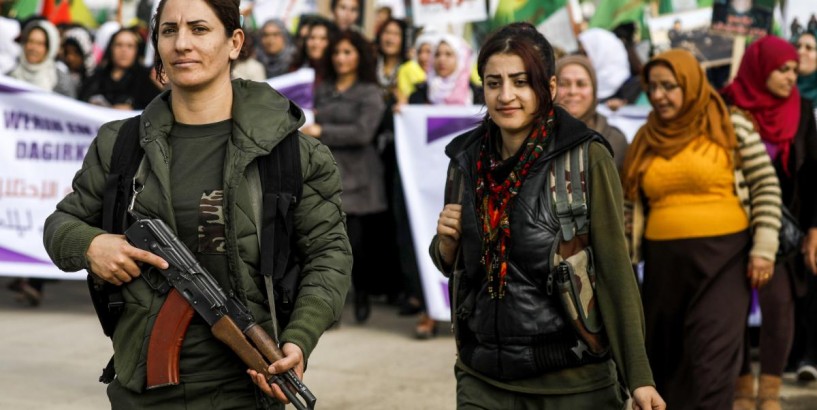 Russia: US wants to establish Kurdish entity north of Syria

Russia: US wants to establish Kurdish entity north of Syria December 6, 2018 at 3:45 am | Published in: Asia & Americas , Europe & Russia , Middle East , News , Russia , Syria , US A Syrian Kurdish woman fighter holds a Kalashnikov assault rifle while marching with others during a demonstration in the northeastern Syrian city of Qamishli on November 25, 2018, as they mark the International Day for the Elimination of Violence against Women. (Photo by Delil souleiman / AFP) (Photo credit should read DELIL SOULEIMAN/AFP/Getty Images) December 6, 2018 at 3:45 am Russian Chief of Staff, General Valery Vasilyevich Gerasimov on Wednesday has accused the United States of trying to establish a quasi-state entity for Syrian Kurds that is independent of Damascus on the eastern Euphrates River.

“The situation on the eastern Euphrates River is escalating, where the US, using the Syrian Kurds, is trying to create an independent quasi-state entity that would be independent of the central authorities. They are also forming a government for the so-called Democratic Federation of Northern Syria” Gerasimov said during a briefing for military attaches.

He added that Washington who supports the Kurd’s separatist sentiments with military vehicles also allows them to oppress Arabs.

Gerasimov explained that Daesh terrorists are only located in eastern Euphrates River, in areas controlled by the United States.

The Russian General has criticised the actions of the US-led coalition in Syria, saying “the coalition and its Syrian Democratic forces are unable to control Daesh formations in Hajeen town”.