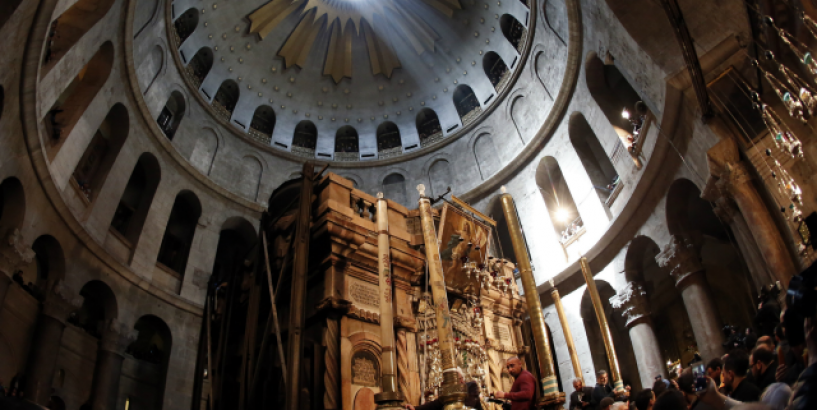 I see your point. I'm no theologian but didn't the Son said "before Abraham was I AM"? The Father's uniqueness isn't taken away by Filioque, the Father begot the Son.

I think you'd be better served by saying that Constantine wasn't a Christian at the time he killed his wife and son, since you consider him a saint "equal to the Apostles". Conversion of the heart aka "metanoia" needs repentance as a prerequisite, not a miracle in the sky or the killing of political rivals.

You're right, the churches of dozens of cities claim to have been founded by Apostles, I didn't explain myself well. I should have written that 3 Apostolic Sees: Rome, Antioch and Alexandria, had precedence over the others. Constantinople wasn't one of them but was declared such on the grounds of being the Capital of the Empire, not because its church was supposedly founded by St. Andrew. And aren't we confusing Byzantium with Constantinople? Peter takes precedence over Andrew anyway, if we're following the pecking order, and the Church of Rome has always been prima inter pares. Constantinople was made 2nd in importance after Rome because of its position as Imperial Capital, and the original triarchy became a pentarchy after giving Jerusalem a honorary place.

By the 11th century Venice was a bigger power than Constantinople, which no longer had the monopoly on trading with the east. The Greeks felt affronted. They had to ask Rome for help against the Turks after the Greek defeat at Manzikert. The authority of the Emperor at Constantinople was challenged by the "Holy Roman Emperors" crowned by the Popes. Resentment grew into riots and riots ended in massacres. Is it hard to take that seriously? Gibbon called them "degenerate Greeks" soon to riot and murder over things like chariot racing.

These days the Patriarch of Constantinople presides over a building in the Phanar neighborhood and some churches in Istanbul. The Patriarchate of the "3rd Rome", Russia, broke away from Constantinople some time ago.

Wouldn't Orthodox sources have Orthodox bias? I know enough: the tale of the apostles to the Slavs, the merry tale of the Russian conversion, the history of Kievan Rus, Novgorod, the Varangians in Miklagard aka Constantinople. I haven't read any anti-orthodox pamphlet, just the usual: the Alexiad, some book about Justinian, Decline and Fall by Gibbon, watched the Aleksandr Nevsky movie, fan of Likourgos Angelopoulos here, etc. I just stumbled upon the corruption of the orthodox church on the news where it was linked to the Russian mafia and the Russian mob government:

I wish I could see Hagia Sophia the way Vladimir the Great saw it, it's such a nice tale: The Cathedrals of the Franks were dark and austere devoid of happiness, Judaism and Islam forbid drinking which is the fave pastime of the Slavs, but Vladimir's envoys thought they were in Heaven after witnessing the High Mass at Hagia Sophia. I like the Orthodox liturgy, but I like the Lingua Latina better.