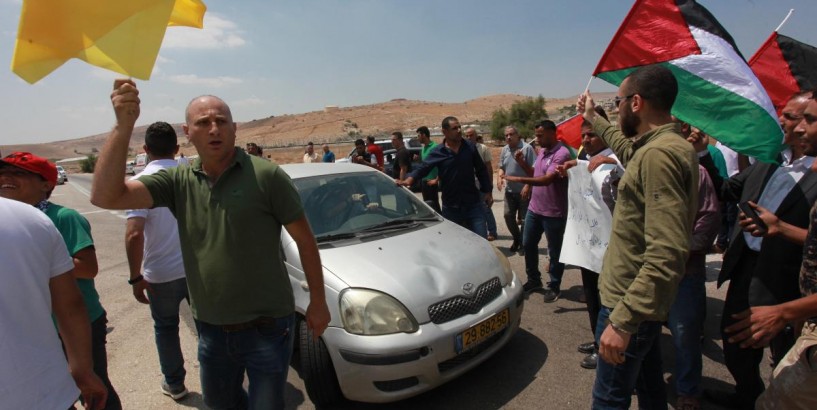 The newspaper also stated that vandals wrote in Hebrew “Jews won’t remain silent” on a truck in the eastern neighbourhood of the city.

Israeli police have launched an investigation into the “price tag” attacks, which are usually carried out by extremist settlers in the West Bank. However, this type of offences has spread to Arab towns and villages in Israel as well.

Issawi Freij, member of the Knesset for Meretz and a resident of Kfar Qasim, commented on the incident saying: “It is a new hate crime, and this time it happened in my city.”

Freij accused the Israeli government of being responsible for these crimes by turning a blind eye to this type of transgressions. He stressed: “the ongoing crimes are the result of the failure of the Israeli government, which is not trying at least to enforce the law and arrest the criminals,” according to the same newspaper.

He added: “The deeper the failure of the government is, the greater the motivation of offenders to commit more crimes becomes.”

Israeli settlers are active in carrying out attacks against Palestinian property as well as Islamic and Christian religious sites inside the Green Line, the West Bank and Jerusalem under the slogan “Price tag”.

Israeli Prime Minister Benjamin Netanyahu has repeatedly criticised this criminal trend but has not taken effective measures to stop it.

Among the most remembered crimes committed by these gangs was setting a fire in the Dawabsha family house in the West Bank village of Duma, near Nablus, at the end of July 2015.

The incident resulted in the immediate death of 18-month-old toddler Ali Dawabsha and the demise of his father, Saad Dawabsha, a week after the crime, due to severe burn injuries.

The toddlers’ mother also passed away 40 days later, while one child named Ahmed is still being treated for severe burns.

The crime sparked a wave of outrage, at local and international levels, forcing the Israeli police to arrest two settlers, one adult, Amiram Ben Oliel, on charges of murder, and a Jewish minor who was charged with planning the attack. However, their trial has not been yet completed.