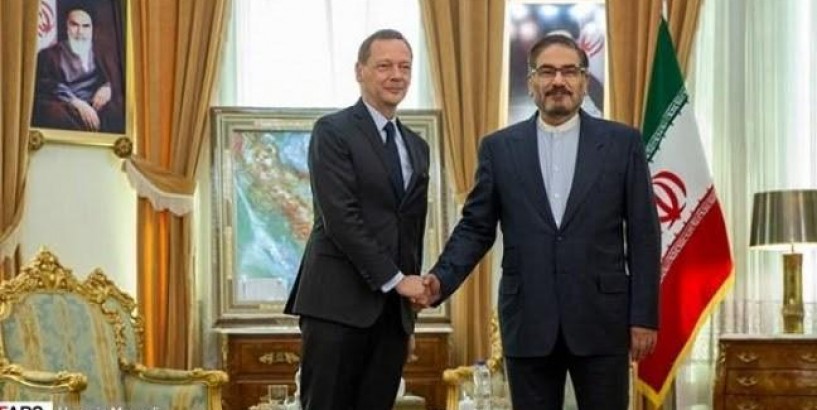 Shamkhani met today the French President’s Advisor for Diplomatic Affairs, Emmanuel Bonn to discuss the mechanisms by which European countries will implement their obligations under the nuclear agreement, as well as other bilateral and regional issues.

Shamkhani criticized the European countries’ ineffectiveness in adhering to their commitments under the nuclear deal, and the lack of will against the measures taken by the US, which he described as “destructive” of this multilateral agreement.

He indicated that, given that Europe had taken advantage of the opportunity of the last year, during which Iran had fulfilled its obligations under the nuclear accord, Iran had made a firm decision to implement the commitments in a way that matches the actions of other parties, adding that the time of unilateral adherence to the agreement’s terms had reached an end.

Bonn announced that his visit to Tehran is not for mediation and that he does not carry any message from the US to Iran.

During his meeting with Shamkhani in Tehran today, Bonn stated: “I have not come to Tehran to mediate, and I have no message from the US to Iran.”

He pointed to France’s awareness of Iran’s ability to withstand the various pressures over the past 40 years and its endurance of various forms of sanctions. He declared that despite the US’ desire, will and actions, Iran’s ability, influence, and strong position has increased considerably over the last 20 years at regional and international levels.

According to Bonn, the French president is seeking to reach joint initiatives for establishing a truce regarding the US economic war against Iran, believing that this measure will reduce growing tensions in the region.

He said: “Given the undisputed role and influence of Iran in the region, Paris is willing to ensure the continuance of dialogue and cooperation with Iran to manage the ongoing crises in Syria, Yemen, Iraq, and Lebanon.”

The spokesman for the Iranian Foreign Ministry, Abbas Musavi, welcomed the role of France in reducing tension and implementing the nuclear agreement, noting that Iran has kept the doors open for diplomacy.

Speaking to the Islamic Republic News Agency ( IRNA ), Musavi has mentioned the visit of the French President’s Advisor for Diplomatic Affairs to Tehran, saying that “following the withdrawal of the US from nuclear agreement and the failure of the European parties to fulfil their obligations to Iran, Iran has decided to find a mechanism to reduce its obligations under the nuclear deal, and thus we have seen the reactions and diplomatic positions in the region and worldwide regarding the matter.”

He continued: “We did not witness such fuss when the US withdrew from the nuclear deal, even though such action was a clear breach of the agreement. Now that Iran has taken some steps to restore the balance between its obligations and its rights under the agreement, we noted that many statements have been issued to express concern over the Iranian decision.”

Musavi asserted that Iran informed the other party that, while adhering to the agreement, it would not abandon the rights of its people and would defend them with all its might. The subject was addressed by the president’s message to the leaders of the 1 + 4 countries as confirmed by all Iranian officials in their statements and during interviews. Thus, although Iran insists to adopt this approach, it will not close the door of diplomatic solutions. ”

The spokesman for the Iranian Foreign Ministry stressed that his country is not in the process of escalating tension and confrontation and that the Iranian authorities have informed European delegations secretly and publicly that they are seriously considering to their views. However, if they are truly willing to ease the tension, they should look for the roots of the dispute.

He highlighted that the US’s illegal withdrawal from the nuclear agreement and the subsequent imposition of a broad ban and great pressure on the Iranian people is a form of “economic terrorism and a starting point of an economic war.”