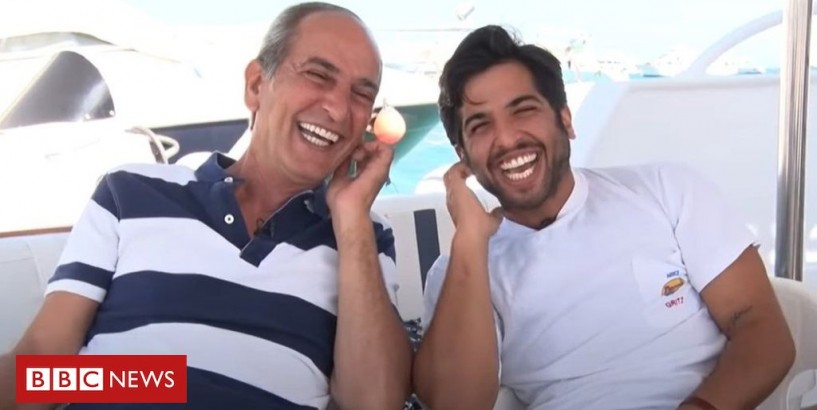 Hisham Selim, famed Egyptian actor, praised over transgender son 10 May 2020 These are external links and will open in a new window Close share panel Image copyright DW ARABIC Image caption Nour Selim (right) spoke about his experience as a trans man alongside his father Hisham A leading Egyptian actor who revealed on TV that his daughter had transitioned to become a man has been widely applauded on social media.

Last Sunday, Hisham Selim took viewers by surprise when he spoke openly about 26-year-old Nour's step - a rare occurrence in the conservative country.

It prompted a wave of support, with LGBT activists seeing it as a boost.

In Egypt, a religiously conservative society, the LGBT community is widely stigmatised.

Transgenders, however, are comparatively more accepted by society and government in Egypt than homosexuals.

Although homosexuality is not explicitly criminalised under Egyptian law, LGBT people are periodically subjected to crackdowns and arrests on the grounds of "debauchery". 'I must help him'

In the first interview, on the privately-owned channel Al-Qahira Wa al-Nas, Selim revealed how his son - then aged 18 - first told him about feeling uncomfortable with the gender he was assigned at birth.

"I am living in a body other than my own," he recalled Nour as saying.

"I was not surprised... because from the day [he] was born I felt [his] body was a boy's body. I always suspected this," Selim said. Media playback is unsupported on your device Media caption Egypt is the only Arab country with legal provisions for transgender people

Selim, 62, praised Nour for being "courageous", especially as "we live in a society where these things are difficult... very difficult".

He also spoke about the challenges his son was facing in getting his gender reflected on his national ID - which expired two years ago - because his transition was not yet complete.

"The problem in Egypt is that we have either female or male; we don't have anything in-between to refer to the transitional stage," Selim said.

Although transitioning is legal in Egypt, the process is long and complex. It involves medical tests, psychological treatment and approval from both doctors and religious clerics.

Only 48 hours later, Selim and Nour were interviewed together by DW Arabic on a yacht moored at the Red Sea resort city of Hurghada.