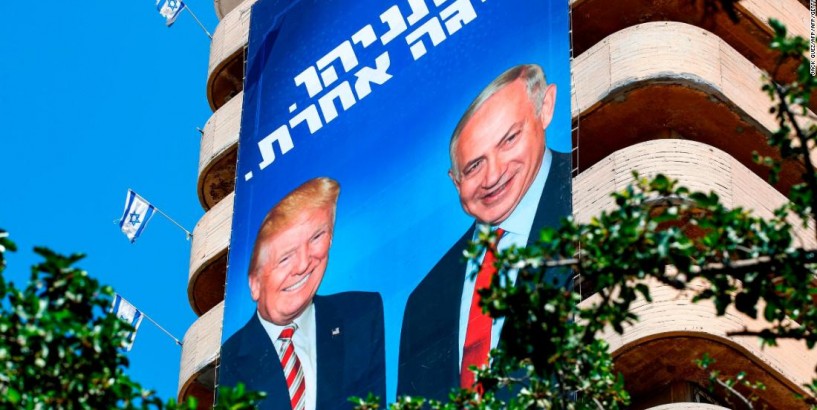 Jerusalem (CNN) "The 15-second Video That Could Kill Netanyahu's Rock-star Election Campaign" thundered a gleeful headline in the left-leaning Haaretz newspaper -- recycling online video of Benjamin Netanyahu being hustled away from election hustings amid sirens warning of incoming rockets from Gaza.

"...the Ashdod video cast the prime minister in an unfavorable and cowardly light," Chemi Shalev wrote in a commentary for that paper. Haaretz would say that -- especially in the last days of an election campaign in which Israel's right-wing leader hopes to cement power. And build a coalition that will keep him in power after 10 years already in office. The characterization of his exit in the video is unfair. Netanyahu left the auditorium as the rockets from Gaza were being intercepted by Israel's Iron Dome anti-missile system with dignity -- he did not scuttle nor did he look the least bit rattled. But an air of desperation, perhaps something close to panic, has entered the Likud campaign as polls show them evenly matched by the centrist Blue and White party of rival Benny Gantz. Read More To beat them, polling shows that Netanyahu needs every right and far-right wing vote he can garner. Dogged by allegations of corruption in three cases that may yet lead to his indictment, "Bibi" Netanyahu used to be known as the "Teflon PM" -- the man against whom bad stuff just would not stick at home. Internationally he's a household name. He has repeatedly denied any wrongdoing, denouncing the investigations as a media-led "witch hunt." But as some of the alleged muck at home has begun to stick, so his campaign has emphasized Netanyahu's standing as a significant player on the world stage. The Benjamin Netanyahu Facebook page leads with a heady video montage of his meeting with US President Donald Trump, his Russian counterpart Vladimir Putin, and Indian Prime Minister Narendra Modi, and speeds up as he glad-hands his way around the world's capitals meeting less famous (or less enthusiastic) heads of government. A giant Israeli Likud Party election banner hangs from a building in Tel Aviv showing Netanyahu shaking hands with Trump, with a caption above reading in Hebrew "Netanyahu, in a league of his own." Billboards show him with Putin, Trump and Modi alongside the slogan "a league of his own." His pitch is clear. But there's a creeping sense that, perhaps, as his campaigning gets more strident in its siren calls to the far-right wing vote, he's risking being in a league of his own in the world. The Ashdod incident has undermined his reputation for being "Mr. Security" too. He's campaigned in the past as the Israeli leader who would, and could, end the militant group Hamas's control over Gaza. But it also took away his ability to own the campaign narrative which he's attempted to set with an announcement that he would -- if elected -- unilaterally annex the Jordan Valley and establish Israeli sovereignty over the region. The proposal was met with derision by the Blue and White alliance, which claimed that he's pinched its idea. It seemed to resonate very little with the hard right he was hoping to galvanize behind the Likud banner. Chorus of disapproval Above all, though, it got a muted nod of approval from his ally in the White House -- not the ringing endorsement he might have hoped for. And on the eve of a visit to reinforce his role in the global big league with a meeting with Putin in Sochi, the Russians came out and condemned his Jordan Valley proposal. "We share concerns about such plans from the Israeli leadership, the implementation of which could sharply escalate tensions in the region, undermine hope for establishing a long-awaited peace between Israel and its Arab neighbors," the Russian foreign ministry said in a statement hours before the Israeli PM flew to his meeting with the Russian President. Russia joined a chorus of disapproval from across the Arab world, the United Nations and European Union. Netanyahu's plan to annex the Jordan Valley came just before Trump sacked a key ally in the White House -- John Bolton. The Israeli PM and the US national security adviser had been in lockstep on Iran. Both saw the Islamic Republic as a nation that needed to be sanctioned (and perhaps bombed) into negotiations. Like Trump they believe that Iran should be forced to end any chance of developing a nuclear weapon -- and abandon its support for militant groups like Hezbollah. Bolton is reported to have been angered and blind-sided by Trump's offer of unconditional talks with Iran's President Hassan Rouhani in New York later this month -- and to have been fired for his objections to the idea of easing some US sanctions to make that happen. Netanyahu gives a speech before a sign for the new settlement of "Ramat Trump", or "Trump Heights" in English, during a ceremony in the Golan Heights on June 16, 2019. A Rouhani-Trump summit of any kind during the UN General Assembly later this month would undoubtedly take the shine off what until now has been a glistening Trump-Netanyahu bromance. Meanwhile at home, amid the headlong charge for the right-wing vote, the Netanyahu Facebook page upped the volume again. It posted a message saying that voting for the Blue and White party would lead to a "dangerous left-wing government next week." "A weak, secular, left-wing government that relies on the [Israeli-born] Arabs who want to destroy us all -- women, children, and men -- and will facilitate a nuclear Iran that will wipe us out...," the message said. An outcry followed, amid accusations of incitement against ethnic Palestinians who are Israeli citizens, the Likud Party issued a clarification, saying that the post had been a mistake. "Prime Minister did not see the text. Did not authorize it," the Likud Party said. Netanyahu may not care, though, if he wins the support of the Jewish Power party, an extreme far-right movement that polls show could get four seats in the 120 seat Knesset. Those seats could help him reach the 61 he needs to form a government. If he pulls it off he's clearly confident that his Teflon coating will prevent the dirt thrown around during the election from sticking to his costume. And if it does, he'll still be there.