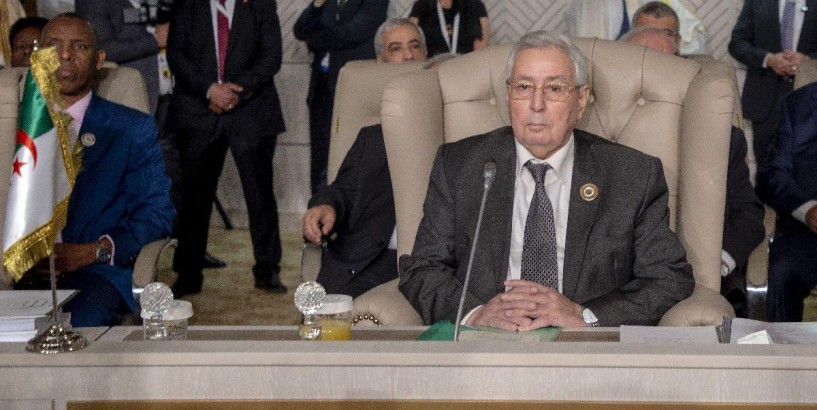 Algerian National Commission for Dialogue and Mediation presents final report to interim president September 9, 2019 at 4:13 am | Published in: Africa , Algeria , News Algeria's Abdelkader Bensalah attends the opening session of the 30th Arab League Summit in Tunis, Tunisia on 31 March 2019 [Yassine Gaidi/Anadolu Agency] September 9, 2019 at 4:13 am The Algerian President’s office announced, Sunday, that the coordinator of the Algerian National Commission for Dialogue and Mediation, Karim Younes, has presented his team’s final report on the crisis to interim president Abdelkader Bensalah.

Algerian government TV channel reported that Bensalah’s report, which comprises a review of the meetings the mediation commission had held with the political class and peoples and associations’ representatives for weeks.

During his meeting with the mediation team, the interim president said that “the report of the Commission includes different points of view on the need to promptly hold presidential elections”.

Bensalah explained that “the report includes sufficient guarantees proposed by the mediation commission for the organisation of presidential elections,” without providing details on the nature of these guarantees.

Bensalah called on the mediation team to carry on its mission to hold consultations on the file of the formation of an independent high electoral commission.

Younes said in statements to journalists that his report impartially conveyed what has been collected during consultations with all parties during the past weeks.

Younes stressed that his commission is still demanding the conditions for the holding of credible presidential elections, which is understood as an indirect call for the departure of the current government.

The mediation team is expected to unveil later in the day the contents of its report to the media. Nevertheless, the two most important points of this report were disclosed, on Saturday, and they are related to the formation of a high electoral commission and amendments to the election law.

According to the head of the Legal Committee of the National Commission for Dialogue and Mediation, Lazhari Bouzid, the proposals are an effort to distance the authorities from the organisation of the elections. Instead, the task will be assigned to a high electoral commission.

Last week, the Algerian army command called for holding presidential elections before the end of the year, considering that the situation cannot bear more postponement.

Since the resignation of President Abdelaziz Bouteflika on 2 April, Algeria has been witnessing political obstruction because of firm positions regarding the most appropriate way out of the crisis.