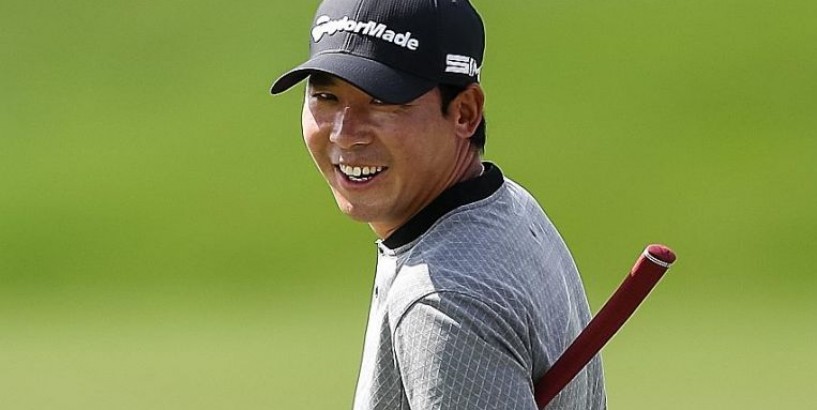 Zhang soars to joint-3rd with eagle at 3M Open

MINNESOTA (Minneapolis) • Chinese golfer Zhang Xinjun is not used to being near the top on the PGA Tour, but he is soaring high after rolling in a 31-foot eagle putt on his third hole of the day on Thursday.

The 33-year-old started with a six-under 65 at the 3M Open to share third place with Tony Finau and four others.

The position is Zhang's best on Tour since he held the first-round lead with Dou Zecheng at the 2018 Zurich Classic of New Orleans, where the pair were 12-under 60 in the four-ball format.

"Just really was able to get it going from there," he said of his eagle at the par-five 12th. "Really the hole right after that, I almost hit it in the hole, and on No. 4 too, almost hit it in there as well. So just hit the ball really good and putted really well too."

Precision was on display throughout the morning for the Chinese, who also hit his 154-yard approach shot at the par-four 14th inside a foot. He carded two more birdies before making the turn, including a 17-footer at the par-three 17th, then added a couple more on the par-three fourth and par-five fifth, the first of which was a near ace.

He carded just one bogey at the par-four second, where he hit the green in three and two-putted.

"I hit most of my tee shots really well," he added. "Iron play was strong as well. And putted really well today, too. It was a good, well-rounded game today."

Richy Werenski, in search of his first PGA Tour victory, birdied the final hole to card a 63 at TPC Twin Cities to sit one shot clear of Michael Thompson.

Zhang is projected to rise 15 spots to No. 49 in the FedEx Cup standings and is close to securing a spot in the first two playoff events.

But, more importantly, he is in position for his biggest payday yet. He has finished inside the top-five just twice in 52 career starts, including this season when he finished tied for fourth at the Houston Open.

He was not the only Asian who made a splash. South Korean Bae Sang-moon made headlines for "one of the greatest par saves in the history of golf", according to pgatour.com.

The 34-year-old, who carded a four-over 75, remarkably made a par on the 18th hole after his first two tee shots went wayward. His first shot found the water so he took a drop. His second swing, and third shot, also landed in the water so he took another drop. Then he drained a shot from 250 yards.

According to the Tour, Bae has the longest hole-out for par in the ShotLink era, ahead of the 176 yards recorded by Steven Bowditch at the fourth hole of the RBC Heritage Open's first round in 2011.