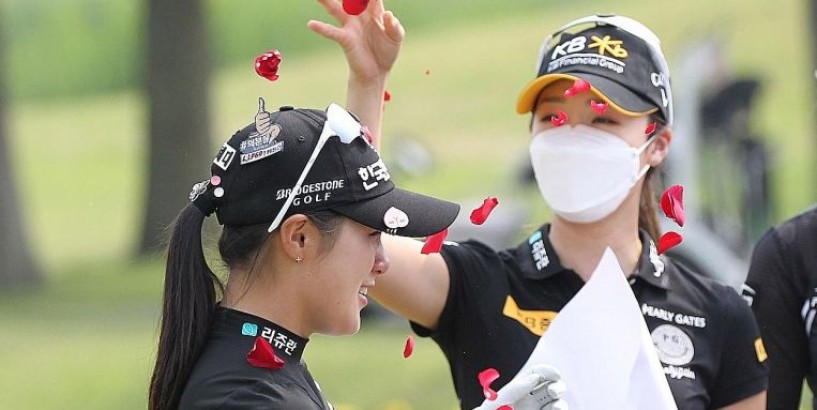 SEOUL • The world's first big-purse post-coronavirus golf tournament wrapped up in South Korea yesterday, marked by a ban on spectators and stringent safety measures that saw competitors having to sit apart while eating.

The US$2.5 million (S$3.57 million) Korean LPGA Championship - featuring three of the world's top-ten women players - grabbed global attention, with broadcasting rights sold to countries including the US, Canada and Australia.

Normally overlooked outside the country, the tournament is the first high-level women's golf event to be played since the LPGA Tour suspended its season in February.

With the main US-based circuit returning only in mid-July at the Dow Great Lakes Bay Invitational in Midland, Michigan, several top South Korean players, who otherwise would normally be playing in America, opted to fly back.

But despite the presence of world No. 3 Park Sung-hyun, sixth-ranked Kim Sei-young and world No. 10 Lee Jeong-eun in the field, No. 92 Park Hyun-kyung prevailed in Yangju, scoring her first victory since turning pro in 2018 to land the US$180,000 winner's cheque.

"The moment I had always dreamt of finally has come true," a tearful Park, who embraced her caddie father, told local cable channel SBS Golf. "I was so disappointed not to have been part of that winners' group last year. I am so happy that I got the first win out of the way in the first tournament of the year.

"I don't think the next win will come easily for me. I have to keep trying."

To avoid the risk of contracting Covid-19, players were advised to keep two metres apart on the course and minimise physical contact, while touching the pin without gloves was prohibited.

Players also had to wear masks before and after their rounds, but could choose whether or not to do so during play - with most deciding against.

The moment I had always dreamt of finally has come true... I am so happy that I got the first win out of the way in the first tournament of the year.

This also applied to the prize-winning ceremony, with Park being congratulated by her mask-wearing peers with elbow bumps and doused with flower petals instead of the customary champagne toast.

South Korea endured one of the worst early outbreaks outside China, but has brought it under control with a widespread "trace, test and treat" programme, resulting in 262 deaths and slightly over 11,000 cases up till yesterday.

As such, world No. 1 Ko Jin-young and Park Sung-hyun will meet in an exhibition skins match titled "Hyundai Card Super Match" in Incheon on Sunday to raise funds for the fight against the disease.