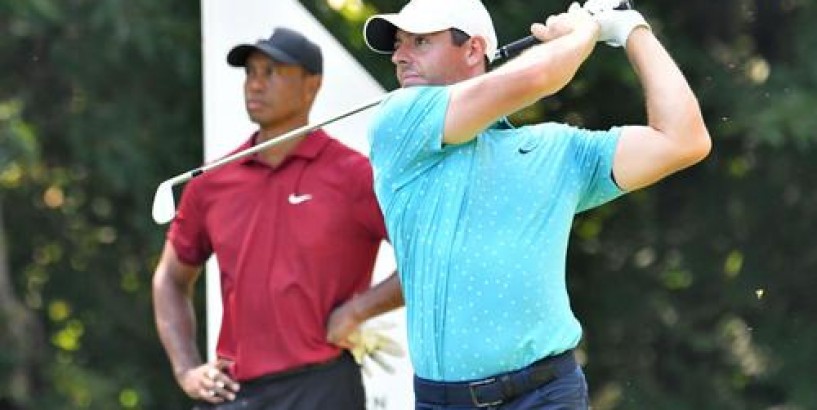 NORTON, Mass. - Without fans in attendance at PGA Tour events these days, even Sunday rounds featuring marque players fail to create a buzz at the course. It's up to the players to create their own energy and inspire themselves into a competitive mindset that brings out their best golf.

Tiger Woods , 44, demonstrated he could still do that by making six birdies over his first nine holes and shooting a 5-under 66 during the final round of the Northern Trust. Woods, a winner of 15 majors, is used to playing in front of thousands of fans, but he was trailed around TPC Boston on Sunday by a group of reporters, cameramen and volunteers who rarely grew over 20 people.

His playing partner for the second consecutive day, world No. 3 Rory McIlroy , struggled again. The Northern Irishman who has won four majors posted a 2-under-par 69 that left him looking for answers.

"This is going to sound really bad, but I feel like the last few weeks, I've just been going through the motions," McIlroy admitted. "I want to get an intensity and some sort of fire, but I just haven't been able to. And look, that's partly to do with the atmosphere and partly to do with how I'm playing. I'm not inspiring myself."

The uninspired McIlroy played inconsistent golf this week in the first event of the FedEx Cup Playoffs, spraying the ball off the tee and statistically being among the least effective putters at TPC Boston.

"I'll go a few holes and hit some good shots, and then on one hole, I'll hit one way right or way left, and I'm sort of like, 'Where did that come from?'" he said.

To remedy that, McIlroy plans to fly home to Florida and test some drivers before heading to Chicago for next week's BMW Championship at Olympia Fields Golf Club.

"The energy is not anywhere near the same," he said. "There isn't the same amount of anxiety and pressure, and people yelling at you and trying to grab your shirt, a hat off you. This is a very different world we live in."

Players ranked No. 70 or better on the FedEx Cup standings after this week advance to the BMW Championship. McIlroy arrived at the Northern Trust ranked No. 8 on the points list. In reality, he's a lock to remain in the top 30 and qualify for the season-ending Tour Championship at East Lake Golf Club in Atlanta, an event he won last season.

For Woods, who arrived at the Northern Trust ranked No. 49 on the FedEx Cup standings, there is a greater sense of urgency. He knew that making the cut would assuredly punch his ticket to Chicago, but qualifying for the Tour Championship, which he won in 2018, is not a lock.

"I wish I would have played a little bit better this week to make it a little bit easier on me next week to try to get into East Lake," Woods said. "This is going to be, if I play well, four out of five weeks, so it's going to be a busy stretch."

While both Woods and McIlroy would love to win a third FedEx Cup, both are also eyeing the U.S. Open at Winged Foot Golf Club in mid-September. They not only want to string good shots together, but also good rounds. They want to put themselves into contention before heading to the tournament that prides itself on being the toughest test in golf.

"This has been a very different year for all of us," Woods said. "I'm just now starting to get into the rhythm and flow of competing and playing again. Hopefully, it gets better."