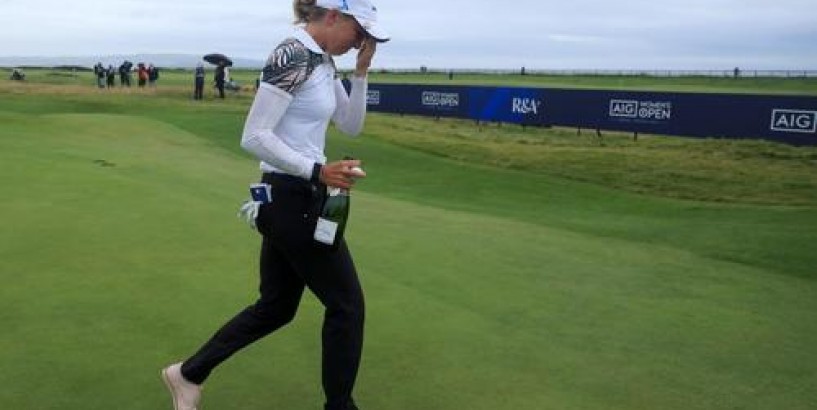 The first female ever to win a major at Troon, the first German of either gender ever to win a major on British soil. The historic achievements piled high for Sophia Popov on Sunday as she emphatically belied her standing as a golfer without any playing privileges on a main tour with a commanding victory here at the AIG Women's Open.

Afterwards, Popov revealed that her inability to break through almost caused her to retire from the sport last year. It is fair to say, the 27-year-old made the correct choice to persevere. In the first six years of her career she amassed £103,000 in earnings. Popov has collected £515,000 for her last four days work in Ayrshire.

Granted, we have seen shocks of this proportion in the male Open before - most notably when Ben Curtis , the world No 396 stunned the world at Sandwich in 2003 - but what was most truly surprising about Popov's two-shot win was that it all seemed so comfortable for the player ranked 304th. Having grabbed the advantage after four holes on Saturday, she was never headed and, in truth, barely troubled by either the links or her pursuers.

Ayrshire loves a major duel - the 1977 Open between Tom Watson and Jack Nicklaus at nearby Turnberry, the 2016 Open between Henrik Stenson and Phil Mickelson - and although the Thai Jasmine Suwannapura reeled off four successive birdies on the front half to get within one, Popov did not begin to look rattled, after posting three birdies of her own on that first nine.

Some experts will point to the absence of crowds being a boon for Popov, but with so much on the line, the tension was still palpable and she showed remarkable fortitude to pull clear again. The birdie on the 15th was definitive. She skewed her drive but from the heavy rough performed a fine recovery before holing an outrageous 35-footer.

Maybe it was a tad fortunate, but if one considers that Popov recorded only one bogey in the 44 holes before her irrelevant final-hole five then it should be apparent that luck had nothing to do with this extraordinary display. She also birdied the 16th and at that point the first pump said it was over, despite the gallant Suwannapura birdieing the 16th and 17th.

A 68 gave Popov a seven-under total with Suwannapura - the two-time LPGA Tour winner, herself, ranked 134th - firing a courageous 67 for outright second and a cheque for £320,000.

Popov's tears poured before he had even tapped in on the 18th. "I don't know what to say - I can't get anything out of my mouth," she said after joining the exclusive club of Martin Kaymer and Bernhard Langer as German major-winners. "There's a lot of hard work behind it, and a lot of struggles that I went through and I'm just glad I was able to overcome everything. I almost quit playing last year, so thank God I didn't."

By the time she teed off at 1.45pm in chilly damp conditions - but, importantly, with very little wind - golf had already learned about the arduous journey Popov, the former Ladies European Amateur champion, had endured to take her three-shot 54-hole lead.

Without one seasonal finish in the top 100 of an LPGA Tour order of merit, Popov had no status on the US circuit and without an entry into the Drive On Championship, the Tour's restart event in Toledo three weeks ago, she actually caddied for her friend, Anne van Dam.

Much had also been made of the fact that Popov - born in America but brought up in Baden - had yet to win on an official tour. Yet while the majority of the game was in lockdown, Popov did prevail three times on the Cactus Tour - one of the only circuits to continue in the first months of the pandemic - and with a ninth place at the Marathon Classic two weeks ago duly earned her place in this field.

She also finished in second place on the Symetra Tour last Sunday - the feeder Tour to the LPGA Tour - and duly arrived in Troon on Tuesday as a dark horse, but quietly fancied by certain tipsters who backed her into 100-1. They are immensely shrewd judges, because Popov, whose only previous appearance in this major was as an amateur at Carnoustie in 2011, clearly adores seaside golf.

In third place came the Australian Minjee Lee, with seven-time major winner Inbee Park recording her fourth top-five in this event, with her 2015 triumph, of course, standing out. Park was one of the few big-named Koreans to travel here and, with her husband, Gi Hyeob Nam, on the bag the experience was more than worth it.

Alas, not a single UK player finished in the top 30, with the English pair of Jodi Ewart Shadoff and Mel Reid, as well as Northern Ireland's Stephanie Meadow, the best-placed in a tie for 39th on nine-over. However, this was still a memorable week for British golf and British women's golf in particular. Just to get this major was an achievement, but for Troon to stage its first ever Women's Open made it that much more special.