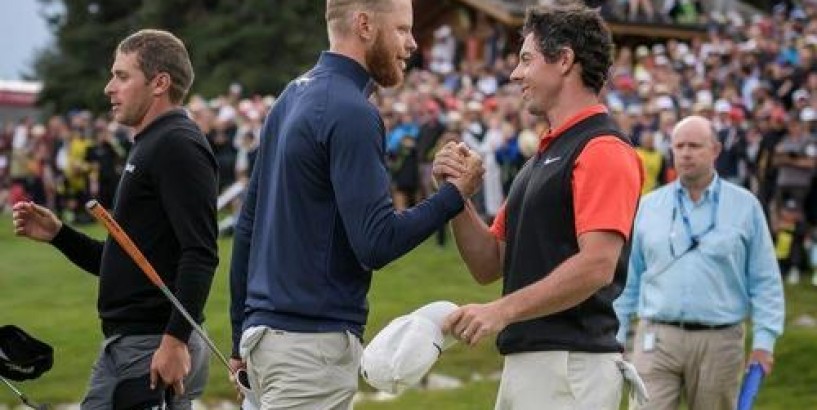 The Swede had begun the final round at Crans-Montana four shots off the pace, but after the turn surged into the lead with five birdies in a row.

A three-putt on the 17th dropped him into the play-off with a 14-under par total of 266 with four-time major champion McIlroy, Italian Lorenzo Gagli, Andres Romero of Argentina and Finn Kalle Samooja.

The 28-year-old sealed his debut EPGA win on the first trip back up the last hole, sinking a 10-footer as McIlroy and Samooja missed from close range.

It was the ideal way to celebrate his 50th European Tour event in the sixth play-off at Crans-Montana in the past seven years.

"It's unbelievable," he told europeantour.com.

"I've dreamt of playing on the European Tour, even better doing it this way. I was in the lead, lost it, went into the play-off with Rory McIlroy among it.

"I was more nervous in the beginning than I was towards the back nine. Got on a good run and the ball kept going in. Just playing with Rory, so many people around, playing with a guy like that adds heat to it right away."

McIlroy was two over for his round after 10 holes, but the Northern Irishman, fresh from last weekend's PGA Tour's Tour Championship and $15 million FedEx Cup prize win secured his presence in the play-off with five birdies for a 67.

He birdied the 12th and 13th to get back to level and then took advantage of the back to back par fives at the 14th and 15th.

A slippery right to lefter on the 17th had him within one and Gagli was also at 14 under when he followed him in after an impressive run of his own.

Overnight leader Romero tumbled down the leaderboard as he bogeyed the first, third and fifth and he was still three over for his round before he made the most of the back nine's pair of par fives.

An approach to tap-in range at the 17th then put him in the play-off but he missed the green with his second as Gagli found the water on the trip back up the 18th, leaving the other three players over their birdie putts for the dramatic finale.

And just as in his rookie season 11 years ago when he lost a play-off after bogeying the last McIlroy was to miss out on the trophy yet again.

Soderberg came through the Qualifying School in 2016 and the European Challenge Tour last season.

He sat 120th on the Race to Dubai coming into this week after securing a top five finish on home soil at last week's Scandinavian Invitation.

"I proved to myself that I can play out here," said the Swede.

"I didn't really know that I was ready to win, I had a terrible start to the season and I felt like I was just trying to make my way into the top 110 and keep my card for next year.