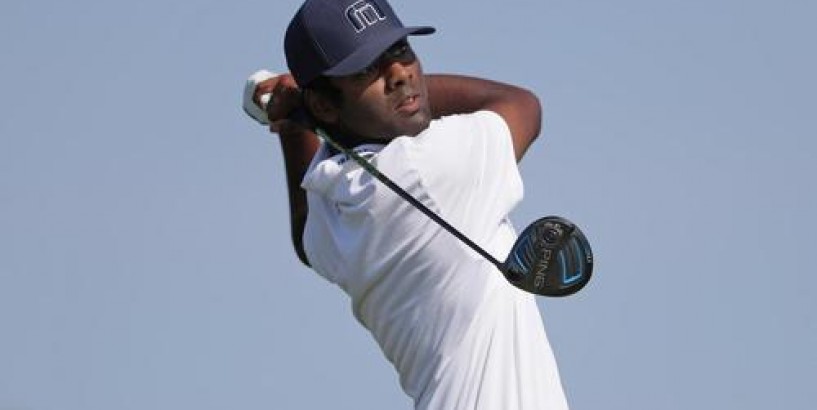 Sahith Theegala fires 62 in first round as a professional

Sahith Theegala's pro career is off and running - or sprinting.

The Pepperdine product, who won the Haskins Award last month as the player of the year in Division I men's college golf, fired a blazing 9-under 62 Monday in the opening round of the Outlaw Tour's Lone Tree Classic. It was Theegala's first round as a professional, and he shares the lead with Andrew Funk.

"It feels great [to be making my pro debut]," Theegala said afterward in an interview posted by the Outlaw Tour on Twitter. "I mean, I was super pumped to get my pro career started. Obviously, it's not the way that every - you know, COVID is affecting everything, but I just try to make the most of it, and I always just try to have a good time, so I thought no different today starting off and it just worked out."

Theegala, who played the MSFI 2.0 at Maridoe two weeks ago as an amateur and tied for 20th, birdied his first hole at Lone Tree Golf Club in Chandler, Arizona, and added birdies at Nos. 5-8 before capping his front-nine, 7-under 29 with a chip-in eagle at the par-5 ninth. He holed another shot from off the green a hole later and closed with a birdie on the par-5 18th.

The Lone Tree Classic, a 54-hole event, wraps up Wednesday.

Before abrupt ending, Sahith Theegala led Pepperdine to the top of college golf While Theegala had the option to return to Pepperdine for another season thanks to the eligibility relief granted by the NCAA, he decided against it. He redshirted his junior year because of wrist surgery, and this past season, with two wins and a Haskins Award, his stock has never been higher. (Theegala also is a finalist for the Hogan and Nicklaus awards, which will be announced during Colonial week and Memorial week, respectively.)

"As much as I would love to come back and compete for a national championship," Theegala told GolfChannel.com in late March, "I do think I'm ready [to turn pro]."

Theegala is one of the few college seniors opting to turn pro. BYU's Peter Kuest, Duke's Chandler Eaton and Texas' Spencer Soosman are the other big names not returning to school, while Vanderbilt's John Augenstein, Baylor's Cooper Dossey and Oklahoma teammates Garett Reband and Quade Cummins have decided to come back because of fewer available playing opportunities, including no Q-School, and lack of sponsorship dollars.