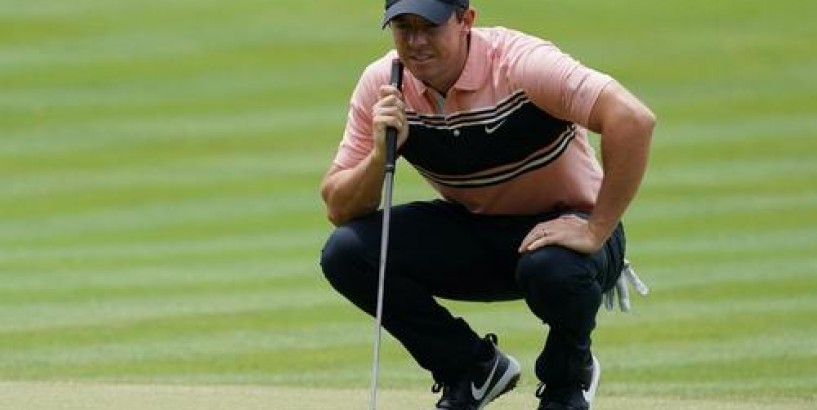 If it seemed daft that Rory McIlroy shot a first-round 63 and was still three off the pace, then the world No 1 thought it just as perverse that there had been talk of the Travelers Championship, in Hartford, Connecticut, being cancelled because of coronavirus withdrawals.

"One or two positive tests and people are panicking," McIlroy said. "I saw a couple of calls to shut the tournament down, which is silly from my point of view. As a whole, it's been going really well. There's a couple of loose ends that we needed to tidy up, and I think we've done that."

With Brooks Koepka and Webb Simpson two of the players who pulled out, the £6 million field has seven members of the world's top 10 instead of nine, but McIlroy more than made up for any perception of a dilution of quality with a wonderful display of ball-striking.

Employing a new three-wood, McIlroy hit his tee-shot to just 12 feet on the par-four 15th (his sixth having started on the 10th), and although he missed the eagle putt the three he had already made on the par-five 13th cushioned any disappointment.

With five other birdies and just one bogey this was a fine beginning for the Northern Irishman, who has fallen short in the first two events in the PGA restart with finishes of 32nd and 41st. Except McIlroy, 31, does not see it that way.

"I deemed the last two weeks as successes. I hadn't been to Colonial before and I hadn't been to Hilton Head in over a decade so, if anything, they were like practice weeks," he said. "You can't base everything off results in this game, and I felt I took a lot of positives [from the Charles Schwab Challenge and RBC Heritage]."

McIlroy's brilliance in Hartford was ultimately cast in the shade by Mackenzie Hughes, who had a 40-footer on the last for a magical 59. The 29-year-old from Ontario left it short, but still took immense satisfaction from a 10-under 60.

Phil Mickelson, who turned 50 last week, also enjoyed a memorable morning and not just because of his 64. He discovered that he has qualified for the US Open due to a change in rules that sees the world's top 70 from March 11 gain exemptions.

America's national championship, the only major Mickelson has yet to win, is taking place at Winged Foot in September and it was there at the famous New York lay-out where the left-hander suffered the most agonising of his six US Open second places, when double-bogeying the last in 2006.

Meanwhile, at the second Rose Ladies Series event, Meg MacLaren survived a dramatic mid-round stumble to lift the title at Moor Park. MacLaren, the two-time Ladies European Tour winner, was six-under after 10 holes but, on the par-four 11th, Maclaren played the wrong ball and was hit with two penalty shots.

The 26-year-old bogeyed the next two holes, but regained her composure to post a three-under 69 to beat fellow Englishwomen Liz Young and amateur Samantha Fuller by two. Charley Hull finished seventh after playing in the Worplesdon Charity Mixed Pro-Am earlier in the day, where she came 23rd behind Belgium's Thomas Detry.