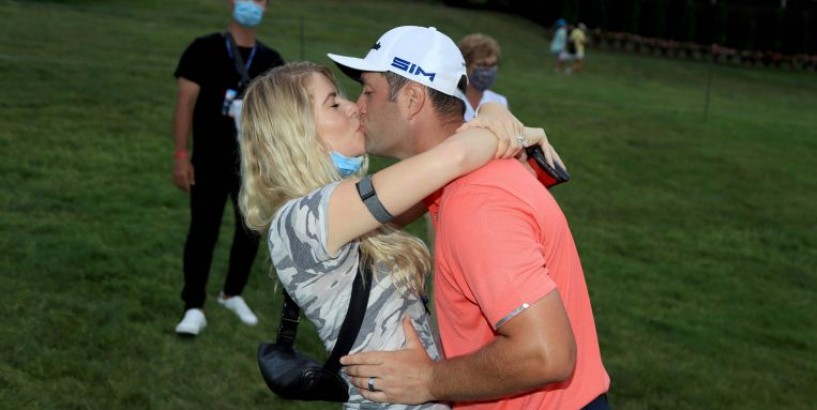 DUBLIN (Ohio) • A procession to victory just would not have been the Spanish way.

Jon Rahm rode a final-round roller coaster to secure the Memorial Tournament at Muirfield Village in true Spanish style by surviving some tricky short game shots, a two-shot penalty, and the evaporation of a huge lead.

His idol, the late Seve Ballesteros, would have been proud. And believe it or not, despite the heart palpitations, Rahm would not have it any other way.

He could have kept the incredible eight-shot lead he held over American Ryan Palmer at the turn and ensured the last nine holes was a casual waltz to his golf destiny. But where is the fun in that?

Ballesteros was a maestro when things got tough, finding ways to escape from trouble. Rahm needed some of the same magic on Sunday at a brutal Muirfield Village that played hard and fast in swift winds.

The 25-year-old had seen his eight-shot lead drop to three when he and Palmer stood on the 15th tee.

Rahm was bleeding, momentum against him and fears were growing that he would slip up again, just like what happened at the Farmers Insurance Open in January, when he finished second despite being the overnight leader.

But despite the fact his accuracy on approach continued to desert him, the reigning Race to Dubai winner focused hard.

He refused to surrender to his inner demons, getting up and down for clutch pars on the par-five 15th, par-four 17th and par-four 18th, and chipped in for what was initially considered a birdie on the par-three 16th, only for a two-shot penalty to be added.

Rahm had inadvertently made the ball move as he addressed the shot and had not replaced it, turning his score into a bogey.

GOLF'S RECENT NO. 1s Spain's Jon Rahm is the eighth golfer to claim the world No. 1 ranking for the first time since Tiger Woods was top in May 2014. Most of their initial reigns were short-lived though.

But it mattered not as the magic had lasted long enough for him to stay three shots up over Palmer (74) with a final round of three-over 75 and for a 279 total.

It gave the European Tour's Player of the Year his fourth PGA Tour title, securing his ascension to the world No. 1 spot on the way. He is just the second Spaniard, behind Ballesteros, to hold that status.

"One of the best performances of my life," he said afterwards.

"Every shot counts, and I tried every shot and got those two last up-and-downs, as a true Spaniard would.

"My short game has been unbelievable all week. It's been so good, and I've gotten close to chipping in a couple times. You always hear about people saying champions make it happen, and at that point, I made it happen."

In the past, he has admitted he would not have made it happen in similar circumstances. Emotion plays a huge role in his game and previously, it had worked against him.

But he feels that he has matured after finding ways to channel his emotions to do well.

"Luckily, I've been pretty good at learning from my mistakes and getting a little bit better each time and today was a clear example of it," he said at the Jack Nicklaus-hosted event.

"I knew it was a complete grind, and it's a true honour to be now the Memorial champion and to be part of Jack's (Nicklaus) legacy."

On replacing Ulsterman Rory McIlroy at golf's summit, he said: "I made that deal with myself very young. I believe at 13 or 14, I started working towards that goal, and everything I've done golf-wise has been to become No. 1 in the world and the best player I can be.

"It's pretty surreal to think it's happened this quickly, in less than 10 years. I mean, how many people get to achieve a lifelong dream in their mid-20s? It's incredible." PGATOUR.COM