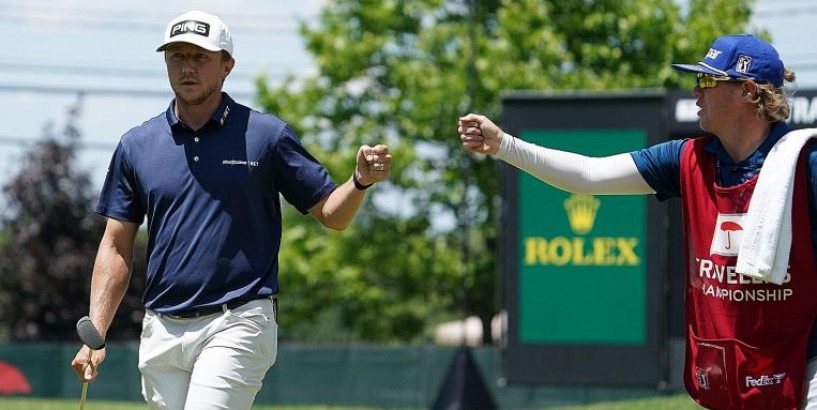 NEW YORK • Mackenzie Hughes lit up TPC River Highlands in Connecticut on Thursday, firing 10 birdies in a 10-under 60 to seize a three-shot lead in the PGA Tour's Travelers Championship.

The Canadian enjoyed a career-low round despite coming up short on a 40-foot birdie attempt at his final hole to miss out on a 59. That gave him a comfortable lead over world No. 1 Rory McIlroy, Xander Schauffele and Viktor Hovland, who shared second place on 63.

"It was pretty fun," Hughes said. "The hole starts to look pretty big. You're just thinking about making birdies. Unfortunately I came up one short, but I beat my career best so that made me feel pretty good."

The 29-year-old shone over the same Cromwell, Connecticut layout where American Jim Furyk fired a PGA-record 12-under 58 in the 2016 final round.

He teed off on the 10th and launched his birdie binge with a 30-footer from the fringe at No. 11. He birdied five straight to close the back side. "It was a slow build," said Hughes, who rolled in a 31-foot birdie putt at No. 18. "I just convinced myself to keep the pedal down and keep making birdies."

Four-time Major champion McIlroy also opened on the back nine and rolled in an 11-foot eagle putt at the 13th. He followed with birdies on Nos. 14 and 15 before missing the green for a bogey at the 16th. He birdied four of his last nine holes as well, and said he was not concerned about having a hot start despite the low scores typical at River Highlands.

He said: "As much as it's low scores, you have to keep telling yourself to be patient."

McIlroy's playing partner Phil Mickelson, in his first PGA Tour event since turning 50 on June 16, headlined a group on 64.

The Travelers is the third event since the tour returned earlier this month from a three-month hiatus due to the deadly coronavirus.

Golfers appeared to be taking heed and paying closer attention to Covid-19 safety protocols after PGA Tour commissioner Jay Monahan issued a stern warning on Wednesday. This followed the withdrawal of Major champions Brooks Koepka and Graeme McDowell after their caddies tested positive for Covid-19, while Cameron Champ withdrew on Tuesday after testing positive.

But McIlroy said there was no cause for alarm. "I saw a couple of calls to shut the tournament down, which is silly from my point of view," he said. "As a whole, it's been going really well."

0 Bogeys in Mackenzie Hughes' career-best round of 60, the joint second-lowest score on the TPC River Highlands course behind Jim Furyk's 58 in the 2016 final round.