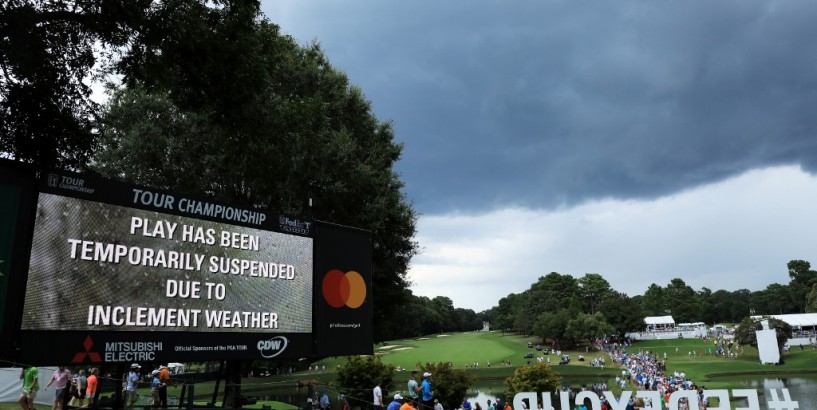 At least six fans were injured after lightning struck trees at the PGA Tour Championship on Saturday, forcing suspension of third round play at the season finale.

A leaderboard displays a warning as play is suspended due to inclement weather during the third round of the TOUR Championship at East Lake Golf Club on August 24, 2019 in Atlanta, Georgia. (Streeter Lecka / Getty Images / AFP)

A statement from the PGA Tour said four fans were injured after two lightning strikes hit trees near the 16th tee at East Lake Golf Club in Atlanta, showering debris over nearby fans.

Paramedics treated the four spectators while two other injured fans also received treatment before being hospitalized.

“Our latest report is that their injuries do not appear to be life-threatening,” the PGA Tour said in a statement.

Dramatic slow-motion footage of the incident screened by NBC television showed a lightning bolt hitting a large tree near the fans before bursting into flames.

The lightning strikes hit the course shortly after players had been removed for safety reasons as storms rolled into the area.

“The safety of our fans, players and partners is of the utmost importance,” the PGA Tour said.

When play was halted, Justin Thomas led the leaderboard on 12 under with only five holes of the third round completed.

Northern Ireland’s Rory McIlroy was a shot off the pace on 11 under after going through the first five holes at one over par.

Brooks Koepka was alongside McIlroy on 11 under after also finding the early going tough, recording bogeys on the first and third holes to be two over through five.