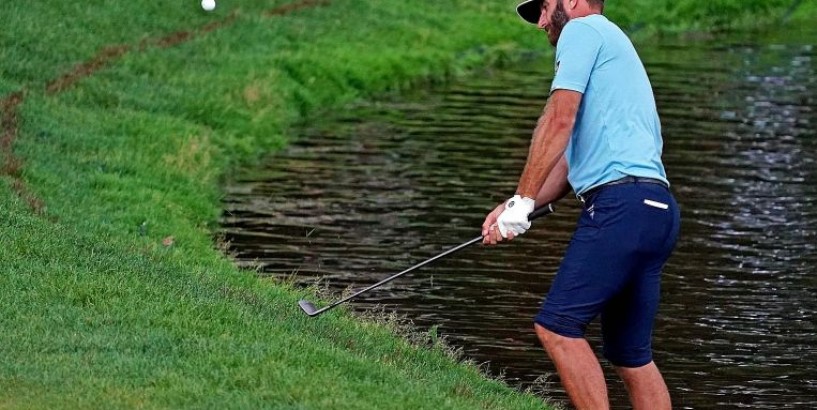 Late save seals win No. 21 for Johnson,

CROMWELL (Connecticut) • The began last week with a flurry of positive coronavirus tests among players and caddies, but the event warily lurched forward.

By the end of the final round on Sunday, nearly all was forgotten as another PGA Tour event closed with gripping, taut drama.

There was Dustin Johnson, ranked sixth on the Tour, standing in a pond with his trousers rolled up, desperately trying to save par.

There was Brendon Todd, who began the day with a two-stroke lead, having to endure the dreaded despair of a shanked chip shot that ruined his round.

There was Kevin Streelman making a late charge as if conjuring the mojo of his 2014 Travelers victory, when he finished the final round with seven consecutive birdies.

In the end, at the TPC River Highlands course, it was Johnson who carded a final-round three-under 67 to finish at 19-under 261, beating Streelman (67) by a shot.

It was his 21st Tour victory and his first since he won the World Golf Championship event in Mexico in February last year. It also means that the 36-year-old has won a Tour event in each of the past 13 seasons. Only Jack Nicklaus, Arnold Palmer and Tiger Woods have longer streaks for wins in consecutive PGA Tour seasons.

"It's obviously a great streak and any time you're mentioned with those names, it's obviously a big accomplishment," he said. "But it was a long time between wins and hopefully I won't have to wait that long again for the next one."

On Sunday, he was forced to wait through a weather delay of about an hour while leading the tournament with three holes left to play.

"The rain delay didn't help because I had time to think about things," said the American, who now rises to world No. 3. "I had been on a nice roll before that."

It would be more accurate to say that he had settled down after an adventurous stretch of golf where he chased down Todd but was suddenly staggered by wayward tee shots. In all, he had three bogeys and four birdies in his final 12 holes.

On the 15th hole, a short par four, his tee shot was heading for a pond to the left. Though the ball landed just a few feet from the water, luckily for Johnson it remained on the grass bank.

His only chance to advance the ball towards the green from about 25 yards away was to wade into the pond, which he did after removing his shoes and socks and hiking up his pants to just below knee level.

His chip travelled about a third of the way to the green and Johnson pitched his third shot within four feet of the hole. He made the par putt.

A bogey on the par-three 16th after the weather delay cut his lead over Streelman to one stroke, but the latter could not replicate his 2014 magic on the greens with five successive pars.