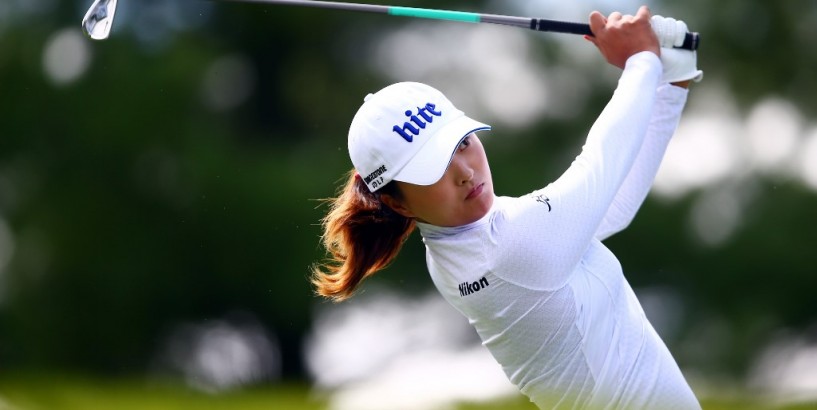 Ko, Larsen set up final round duel in Toronto

World number one Ko Jin-Young and Denmark’s Nicole Broch Larsen set up a final round duel at the Canadian Pacific Women’s Open on Saturday after battling to the top of the leaderboard following a low-scoring third round.

Jin Young Ko of Korea hits her tee shot on the 2nd hole during the third round of the CP Women’s Open at Magna Golf Club on August 24, 2019 in Aurora, Canada. (Vaughn Ridley / Getty Images / AFP)

Overnight leader Broch Larsen carded a six-under-par 66 to finish the day on 18 under par alongside South Korean star Ko, who posted a bogey-free seven-under-par 65 in perfect conditions at the Magna Golf Club outside Toronto, Ontario.

Both players, however, can expect a strong final-round challenge from Canadian defending champion Brooke Henderson, who mounted a spectacular closing charge to haul herself into contention.

Nicole Broch Larsen of Denmark putts on the 15th green during the third round of the CP Women’s Open at Magna Golf Club on August 24, 2019 in Aurora, Canada. (Vaughn Ridley / Getty Images / AFP)

Henderson finished the third round two shots off the lead after a seven-under-par 65.

Broch Larsen, who started the day one shot clear, needed a moment of magic on the 14th to maintain her place at the top of the leaderboard heading into Sunday.

The Dane had dropped to 15 under after a bogey on the 10th, and then could only watch as Ko made birdie to take sole possession of the lead at 16 under.

Both players added birdies at the 12th to remain within a shot of each other.

With the pair parring the 13th, the action moved to the 14th where Larsen conjured up a brilliant eagle three on the par five to move to 18 under.

Not to be outdone, Ko then rolled in a birdie putt to also move to 18 under.

Earlier, Canadian favorite Henderson recovered from a disastrous start, which saw her drop two shots in her opening six holes with bogeys on the 4th and 6th, to launch a spectacular charge near the turn.

A trio of birdies on the 8th, 9th and 10th holes took her back to 10 under and she then leapt to 12 under with a brilliant eagle three on the par-five 12th hole.

She then drained long birdie putts on the 16th and 17th to close to 16 under, leaving her just two off the lead.

Henderson is three shots clear of Taiwan’s Hsu Wei-ling, who moved steadily up the leaderboard into fourth place with a seven-under-par 65.

Three players — Japan’s Nasa Hataoka, Thailand’s Pajaree Anannarukarn and Amy Olson of the United States are a further shot back on 12 under, six strokes behind Larsen and Ko.