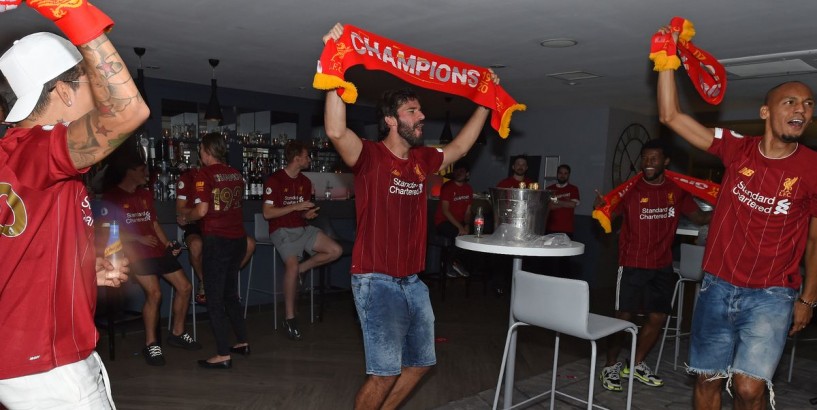 Sport Jurgen Klopp details demand to Liverpool stars during Premier League title celebrations The Liverpool manager insisted he was ready to take criticism for images of his squad all partying together - because he knew it was the right thing to do Share David Maddock Northern football correspondent 22:30, 26 JUN 2020 Click to play Tap to play The video will start in 8 Cancel Play now

Sign up for our free daily newsletter with the latest news and views on the Premier League champions Sign up When you subscribe we will use the information you provide to send you these newsletters. Sometimes they’ll include recommendations for other related newsletters or services we offer. Our Privacy Notice explains more about how we use your data, and your rights. You can unsubscribe at any time. Thank you for subscribing We have more newsletters Show me See our privacy notice Invalid Email

Jurgen Klopp has revealed how he ordered his players to celebrate their title win - so they could remember it forever.

And the Liverpool manager insisted he was ready to take criticism for images of his squad all partying together - because he knew it was the right thing to do after “the most extraordinary year” of their lives.

The players were together for a barbecue at the team hotel in Formby as they watched Manchester City play - and lose - at Chelsea .

That prompted incredible scenes of title celebrations and a party that stretched into the night.

“That was the minimum that we had to do. You couldn’t or I cannot imagine how it would have been had we been all alone at home,” he said.

“Yes, with our families but still kind of alone and not with the players together, how that would have felt. So it was perfect. It was perfectly organised.”

Klopp revealed that only those people at the training ground who have been tested for coronavirus for the past month were present at the celebration, and no hotel staff were allowed near.

But he accepts there may be criticism.

“I was not involved in the planning but I didn’t say no we can not do it. So yes, we decided about that after the Crystal Palace game, and yes I thought it was important,” he said. Joe Gomez and Virgil van Dijk of Liverpool celebrating winning the Premier League (Image: Liverpool FC via Getty Images) Liverpool - Premier League champions Klopp delights stars with dad dancing

“I can understand if people question it, but we are in a bubble and we are all tested twice a week. No other person was in there, no kitchen staff from the hotel - nobody, only us, who are now tested for five weeks, twice a week and no positive case so far.

“If people want to criticise that, then that’s my life, I have to take these kind of things always, but we thought it’s OK to do so.”

Andy Robertson was right at the front of the celebrations when the final whistle went at Stamford Bridge to confirm Liverpool as champions.

And he revealed the joy behind the party which happened afterwards. Fans celebrate Liverpool winning the Premier League title outside Anfield (Image: AFP via Getty Images)

He added: ”It was a personal night. In Madrid we had all our families there but there were also corporate people there and it was a big party. It was more of a socialising party.

“Last night was probably more emotional, you got to have more one-to-one chats, group chats and reflect on the season and stuff. It was really personal last night.

“Only the people who have been in Melwood every day for the last 12 months were there. That is what made it so special. We all came together and we were all hoping that Chelsea would get the win.

“Luckily they produced it and the party could really start. It went long into the night and rightly so. We deserve it and we have put so much work into it. We deserved that moment last night.

"We wanted to be together. We have had a long season and been through so much together and not celebrating with the lads would have been the wrong thing to do.

"We absolutely made the right call and luckily it went for us. It was emotional and we all deserve it.” mirrorfootball