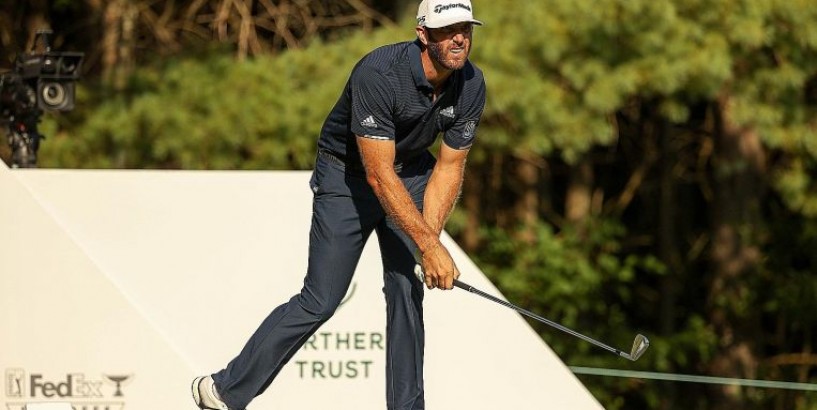 BOSTON • Dustin Johnson is targeting a lengthy stay at the top of the world rankings after reclaiming the No. 1 spot with an 11-shot victory at the PGA Tour Northern Trust Open on Sunday.

The 36-year-old American became the fifth player to be the top-ranked player this year after he leapfrogged Spain's Jon Rahm, fellow American Justin Thomas and Ulsterman Rory McIlroy following his dominating display at TPC Boston.

Compatriot Brooks Koepka has also held the No. 1 status this year and the constant churn has been the most since the rankings started in 1986.

Johnson last held the No. 1 ranking in May last year and it is an accolade he holds dear to his heart, having been on top for 91 weeks total - the fifth-longest period in history.

"It's something that I'm very proud of is to be No. 1 in the world, and I'd like to stay there for a little while," he told reporters. "Obviously, it's been jumping around a bunch here the last few months, but the last time I was No. 1, I stayed there for quite some time, and that's another goal of mine is just to see how long I can stay at No. 1."

The Northern Trust Open was the first of three play-off events that culminate with the Sept 4-7 Tour Championship in Atlanta and the US$15 million prize (S$20.53 million) to the FedExCup champion.

Johnson is determined to finish as the season's champion for the first time in his career.

"It's something I've been close to winning a few times, and it's just something that I would really like to have on my resume when I'm done playing golf," the 2016 US Open champion said after carding an eight-under 63 for a total of 30-under 254. "It's a big title. It means a lot to all the guys out here."

Whether 15-time Major champion Tiger Woods will be in Atlanta remains to be seen, having only played three tournaments since the Tour's resumption in June.

But despite finishing 24 shots behind Johnson, he was encouraged by his final round of 66, his lowest of the year.

Revealing he was starting to find his "rhythm and flow", the former world No. 1 said: "I wish I'd have played a bit better this week to make it a little bit easier on me next week to try to get into East Lake, but this is going to be... a busy stretch either way."

For the golfers aiming to become the first FedExCup champion from Asia, The Northern Trust was not a good outing.

China's Zhang Xinjun is out of the this week's top-70 BMW Championship - the second play-off event - after missing the cut.

South Korean Im Sung-jae, who also failed to make the weekend, fell to eighth in the standings from fifth.