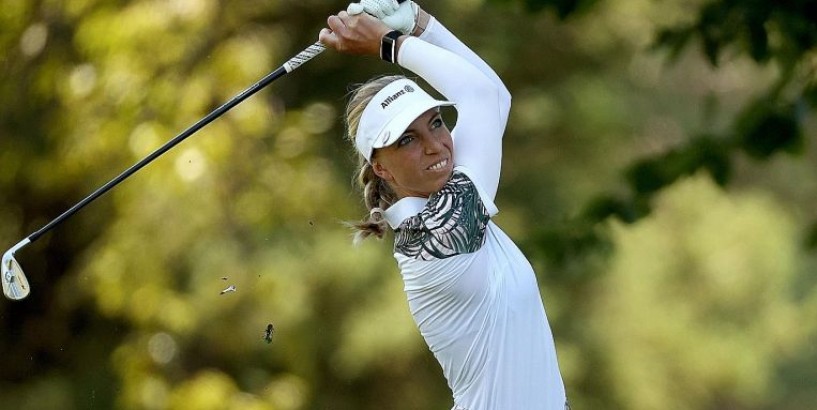 From caddie to champion

GLASGOW • World No. 304 Sophia Popov on Sunday became the first German to win a women's Major with victory in the British Open, just a year after being on the verge of quitting golf.

Three ahead at the start of the final round, the 27-year-old finished on seven-under 277 after carding a three-under 68, with Thailand's Jasmine Suwannapura in second, two shots off the pace.

Popov was in tears even before she hit the final putt, and was overcome with emotion as she left the final green at Royal Troon.

"I haven't talked about it before but I had a lot of health issues in my early time on (the LPGA) Tour. After a couple of years, it was finally diagnosed as Lyme disease," she said.

"It is something that sticks with you, but I am very careful with my nutrition and working out. But it took a lot of personal research and now I feel pretty good."

A compromised immune system was not the only hurdle Popov had to face en route to her maiden win.

Just earlier this month, she was a caddie for Dutchwoman Anne van Dam at the Drive On Championship - the LPGA's first event since February because of the coronavirus pandemic.

Prior to the first Major of the year, Popov had only played in one out of three tune-up events - finishing joint-ninth at the Marathon Classic - and only had one practice round before beginning her maiden title bid behind closed doors.

But she revealed to Golfweek that carrying the bags for her friend gave her a fresh perspective on "what is the smart decision to make here" and it was not necessary to be always aggressive on the pins.

In line with her lack of final-round experience, Popov made a shaky start, hitting her opening tee shot into a bunker and going on to make a bogey five.

But with her German boyfriend Max as her caddie, she bounced back with birdies from inside 10 feet at the par-four second and par-four third and never wavered.

0 Sophia Popov had never won an LPGA event before her Women's British Open on Sunday.

The new world No. 24 made another birdie at the par-five No. 6 and vital back nine birdies at the par-four 15th and par-five 16th helped seal the deal.

Three ahead with three to play, she was able to enjoy the final walk and later credited her partner, who talked about the birth of her niece, for calming her nerves.

"I can hardly get anything out of my mouth," said Popov.

"I was so nervous today and this is just unbelievable... I'm just so grateful to my boyfriend for keeping me calm."

Suwannapura did her best to ruin the fairy-tale run.

The 27-year-old two-time LPGA Tour winner got to within a shot after a fine run of four birdies in a row from the fourth and after bogeys at the par-four 11th and par-four 13th, she again applied the pressure with birdies at the 16th and par-three 17th.

But it was only good enough for the runners-up spot, two ahead of Australia's Minjee Lee, who finished outright third after a 69.

She joins two German men as Major champions - Bernhard Langer won the 1985 and 1993 Masters, while Martin Kaymer claimed the 2010 PGA Championship and 2014 US Open.