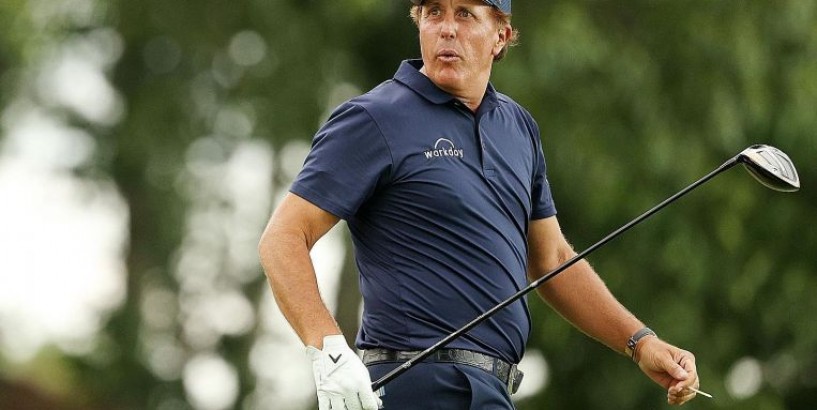 NEW YORK • Phil Mickelson admitted that age was catching up with him, but he was still able to use a solid finish to seize a one-shot lead following the second round of the Travelers Championship in Cromwell, Connecticut, on Friday.

The five-time Major champion closed with a birdie at the last hole of the TPC River Highlands course for a seven-under 63 that brought him to 13-under 127 and one shot clear of first-round leader Mackenzie Hughes (68) and sponsor invite Will Gordon (62).

It also marks the first time in a career that includes 44 PGA Tour titles that Mickelson has opened a tournament with two rounds of 64 or better.

World No. 1 Rory McIlroy (68) and Xander Schauffele (68) were among a pack of five golfers a further three shots back on 131.

"It's probably a little bit difficult as you get older, but when you're playing well, you have that extra momentum, and it should be okay," said Mickelson, who is playing in his first tournament since turning 50 on June 16.

"I've hit some good wedges, but, more important than that, I've given myself fair chances as I've hit a lot of fairways. I felt like I was playing aggressive because of that."

The American, whose eight birdies included three in a row at the 13th, 14th and 15th where he drained putts of six feet, 32 feet and seven feet, added: "I also made some good putts today. I made some tough six-footers that really kept the round going. The birdies at No.s 13 and 15 were not easy, there was a lot of break."

Collin Morikawa came into the week riding a streak of 22 consecutive cuts made to begin his professional career, but finally ran out of gas, falling three short of matching the record held by Tiger Woods.

"It was bound to happen at some point," he said. "Now I guess we're going to stop talking about it."

Denny McCarthy withdrew ahead of his second round, after he became the third PGA Tour player to test positive for Covid-19.

Bud Cauley, who played the first round with McCarthy, tested negative twice but withdrew as a precautionary measure, bringing the number of coronavirus-related player withdrawals at the event to seven.