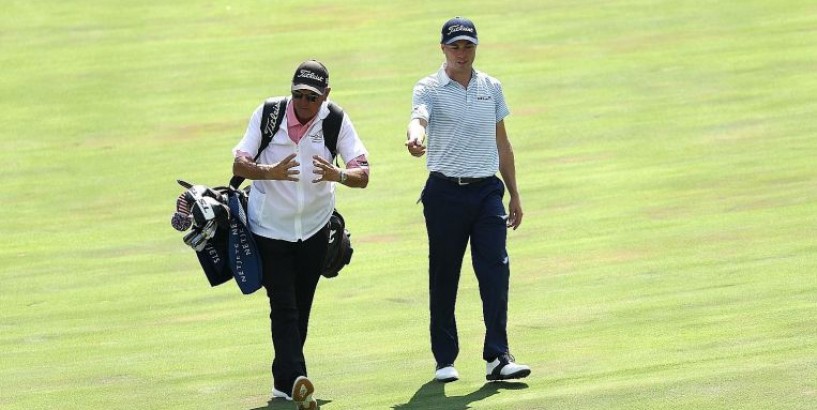 DUBLIN (Ohio) • It was dad to the rescue in the third round of the Memorial tournament on Saturday when Mike Thomas picked up son Justin's bag after his caddie fell ill on a steamy, hot day at Muirfield Village Golf Club in Dublin, Ohio.

With no spectators at the PGA Tour event because of Covid-19 health and safety regulations, the world No. 3 had few options when regular bag man Jimmy Johnson began feeling dizzy.

After hitting his tee shot on the 13th, Thomas said he turned around and there was his father on his bag.

"I told him (Johnson) on No. 12 that if he needed to leave, he needed to leave," said the American. "Just to make sure that he's okay versus both of us worrying about it out there, and I hit my tee shot and I came out and Jimmy was gone and my dad was there."

After taking a double-bogey at the par-three 12th, dad brought Justin a boost and he hit back with a birdie at the par-four 13th.

But Mike, who is also Justin's swing coach, could do little as the 27-year-old went bogey, double-bogey, bogey from the par-five 15th before signing off with a birdie at the par-four last for a three-over 75.

"It was fine," said Thomas with a shrug after a performance that left him on even-par 216 going into the final round, 12 shots behind leader Jon Rahm.

"I didn't make those bogeys because my dad was caddying, it was just poor execution. But yeah, I mean, in a couple of weeks or one day, nobody will remember it. But right now, yeah, it's a bummer."

The latest Jack Nicklaus-hosted event might be one golfers will be keen to forget.

Muirfield Village has provided such a challenge that Thomas said it felt like the year's first Major. That was arguably fitting as it was supposed to be The Open Championship week.

A combination of strong winds of over 40kmh and temperatures of around 40 deg C has ensured the 7,456-yard layout was not its usual lush green.

"The greens are getting purple," Kevin Na (71) told Yahoo Sports. "I mean, downwind to a front pin, you have no chance. Sometimes 30 feet was the best you could do, and you just make par and move on."

The scoring average after three rounds was 73.58. Rahm, who could become the world No. 1 for the first time in his career today if he wins and Rory McIlroy (72) - joint-12th - finishes worse than a tie for second, said he played one of the best rounds of his life to post a 68.

And the Spaniard, four strokes ahead of nearest rivals Tony Finau (73) and Ryan Palmer (73), suggested that scratch amateurs should be allowed in to get a feel of how tough the course is.

"Cut the greens, make sure they're the same speed, flags in the same spots, just for people to see. We were thinking the club champion - the scratch club champion - might not break 80 here today. It's that difficult a course," he said, before amending his prediction to "breaking 90".

At least for Rahm, the only player who was double digits under par after 54 holes, the Memorial could end up being memorable.