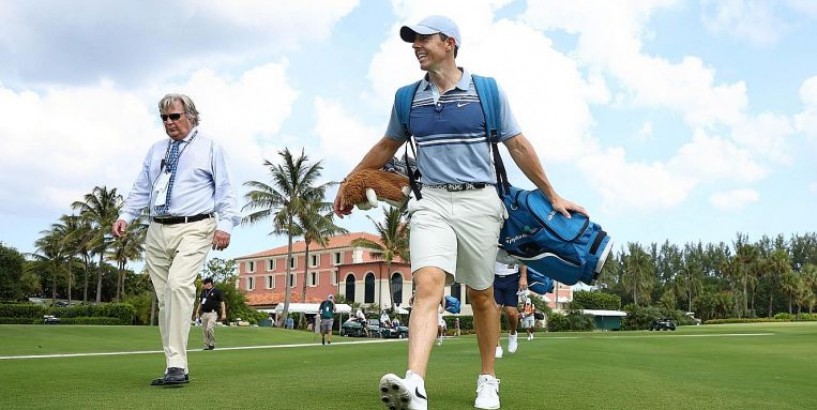 NEW YORK • A tiebreak win for world No. 1 Rory McIlroy and teammate Dustin Johnson at the TaylorMade Driving Relief two-on-two charity skins match on Sunday injected suspense to a course absent of fans and applause in the coronavirus era.

Wearing microphones that captured their smack talk and frustrations, McIlroy and world No. 5 Johnson faced off against Rickie Fowler (27th) and Matthew Wolff (110th), carrying their own clubs and adhering to social distancing procedures after undergoing a battery of tests and screenings.

In one of the rare live televised events during the pandemic, fans were treated to mild trash talk early on, as the Ulsterman teased his 21-year-old opponent Wolff after sinking a putt for par four on the second hole at Florida's Seminole Golf Club.

That bravado was eventually tempered, however, as Fowler's seven birdies put pressure on the heavily favoured pair who boast five Major titles between them.

The competition came down to a closest-to-the-hole tiebreak, in which McIlroy clinched the victory despite an admirable 120-yard wedge shot from Wolff, then letting out a whoop and offering his teammate an "air-five".

"These Seminole greens, the ball can do funny things when you think it's in a good place," said McIlroy, who basked in the "normalcy" of being back in competition for the first time since The Players Championship was cancelled in mid-March. "It's been awesome and it's nice to get back on the golf course."

Raising more than US$5.5 million through sponsors and donations for Covid-19 relief, the competition quickly trended on social media, as golf-starved fans revelled in seeing their favourite players compete in unique circumstances.

"Does DJ (Dustin Johnson) legitimately not know how to carry a golf bag anymore or something?" tweeted @14Thaddeus14, as images of the 2016 US Open champion's clubs hanging haphazardly from his shoulder prompted good-natured ribbing on Twitter.

Wolff's tie-dyed sneakers and handlebar moustache and Fowler's pantomime gestures to an imaginary crowd proved that the proceedings were anything but business as usual, with actor Bill Murray showing off his quarantine snacks in a video call during the telecast.

World No. 2 Jon Rahm was envious. "I think we're all itching to be out there," said the Spaniard, dialling in from his Arizona home. "I sure wish I was there."

English golfer Mel Reid tweeted that women should have been part of the event, adding that the sport missed an "opportunity to represent equality".

"Yet again we show the disparity between men's and women's golf," added the 32-year-old, one of Catriona Matthew's vice-captains at last year's Solheim Cup at Gleneagles.

"I would love to have witnessed women athletes/golfers be invited to showcase the wonderful game as well as these incredible male golfers. Respect us as athletes. I look forward to the day for us to be included."

The quartet were chosen because they are TaylorMade ambassadors who live close to the venue, reported The Scotsman.

The PGA Tour will resume with the Charles Schwab Challenge from June 11-14 in Fort Worth, Texas.