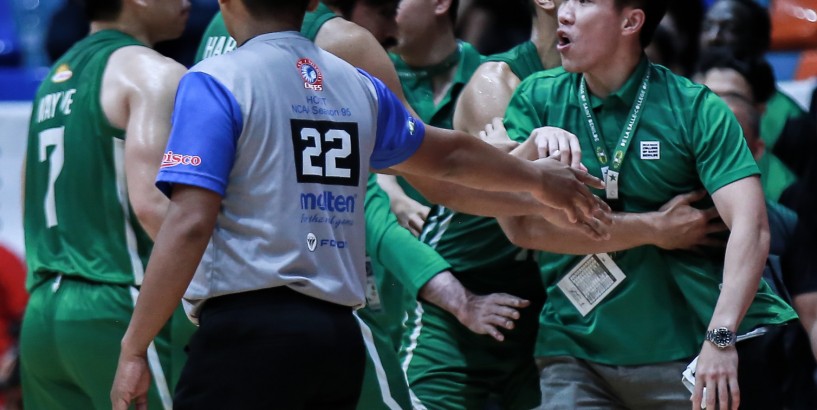 St. Benilde looks to snap a two-game losing skid when it takes on Jose Rizal University Friday in NCAA Season 95 at The Arena in San Juan.

Game is at 2 p.m. before San Sebastian and Emilio Aguinaldo College collide at 4 p.m.

St. Benilde’s TY Tang is ejected in the first half of the game against San Beda recently. (MB photo | Rio Deluvio)

He will serve the penalty during the JRU game. Assistant coach Charles Tiu will call the shots.

“Of curse, we’ll be missing coach TY. He’s been our leader. He has always given us a lot of trust and hopefully we can reward his trust,” said Tiu.

“It’s going to be tough against them. We’ve been struggling lately and our team hasn’t been playing well. Coach Louie Gonzales has done a great job with them right away in his first year (with JRU).”

“We’re going to be missing our best scorer Jimboy, so we have to find other ways to score,” added Tiu, referring to shooter Pasturan who had a season-ending shoulder injury in their previous game against SBU.

As for the Heavy Bombers, the team aims to end the first round by surpassing its three-win total last year. JRU hasn’t played since an 83-63 loss to Mapua last Aug. 16 for a 3-5 card, tied with the Cardinals for sixth place.

San Sebastian, on the other hand, shoots for its third straight win after a 107-90 triumph over the Perpetual Help Altas behind Allyn Bulanadi’s career-high 31 points last week.