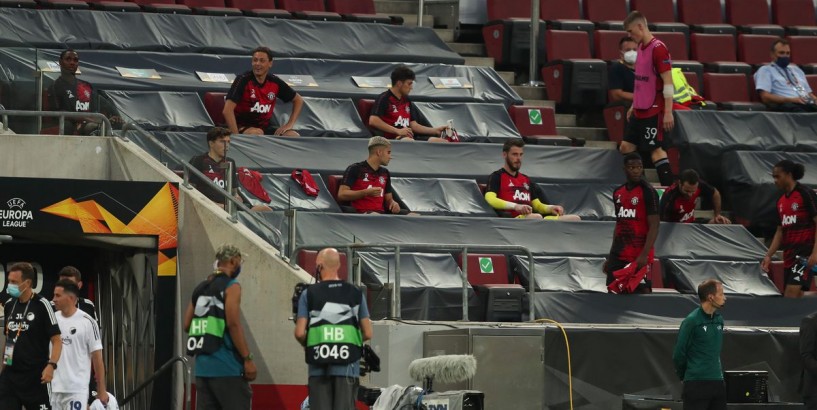 Share By Samuel Luckhurst 06:00, 12 AUG 2020 Sport opinion United substitutes in the stands in Cologne Get the day's biggest United stories delivered straight to your inbox

Subscribe When you subscribe we will use the information you provide to send you these newsletters. Sometimes they’ll include recommendations for other related newsletters or services we offer. Our Privacy Notice explains more about how we use your data, and your rights. You can unsubscribe at any time. Thank you for subscribing We have more newsletters Show me See our privacy notice Invalid Email Long after the final shrill a Danish journalist was rebuked by a Uefa official after he and his compatriots had converged to speak to one of the Copenhagen players at pitch level. "You're not even wearing your mask properly," the Uefa suit harrumphed.

It was in that block where the Manchester United substitutes and staff were housed for over two hours, separated by two seats with a maximum of four per row. There was a schoolboy eagerness about David de Gea as he arranged to sit next to Juan Mata and come the final shrill the unused substitutes skulked down the steps like pupils who had finished assembly.

Even when the lenses are not focused on the stands old habits kick in. Daniel James covered his mouth to remark about something to Scott McTominay, as if he was Joe Pesci trying to obstruct the FBI in Casino. James was one of three substitutes represented by the Stellar Agency whose media guidance is more stringent than others.

There was not complete distrust in the journalists sat behind the United players. Nemanja Matic politely asked if Harry Maguire was offside for a cross, only to be informed there were no monitors in the press box. McTominay was just as curious and then did a double-take, perhaps clapping eyes on one of the Manchester pack members he has blocked on Twitter.

Read More Related Articles United might have finally replaced Robin van Persie Read More Related Articles United take the wrong player off for the right man in Juan Mata Uefa are just as inept at clarifying Video Assistant Referee reviews as the Premier League and the first the United players knew about the check on Mason Greenwood's disallowed goal was from English journalists. Despite the daring Danes' success, mixed zones have been officially shut since the season restarted though it was reassuring there was still some dialogue between players and reporters, even if it was for a matter of seconds. Victor Lindelof spoke to an English reporter on the phone afterwards.

Odion Ighalo had politely urged Greenwood to 'make a run' and was brought to his feet for the disallowed goal but there was no hugging or high-fiving and the celebratory scenes among the substitutes will pale in comparison if United win another Europa League final.

Read More Related Articles Why Martial keeps winning penalties for United Read More Related Articles Solskjaer makes Juan Mata admission In Stockholm, Jose Mourinho turned to supporters and clenched his fists with the game still going on, the injured Marcos Rojo was so affronted by how clammed up United's substitutes were he yelled at De Gea to stand and Eric Bailly lobbed a hefty water bottle which thudded against the bench perspex. Rojo raised his crutches triumphantly at full-time and Bailly ecstatically launched one of Zlatan Ibrahimovic's walking aids. Ibrahimovic told the United press officer to fetch it but soon discarded his crutches.

Even in an empty stadium, Ole Gunnar Solskjaer struggled to be heard by Marcus Rashford from United's bunker-like dugout. Behind closed doors games have made instructions from benches audible and it is reassuring for wannabes and never-gonna-bes how basic the chatter is. Michael Carrick must have said, 'well done, Fred' nearly half a dozen times, Brandon Williams was told to get 'higher' and Solskjaer said before extra-time: "Come on boys, 30 minutes. Keep going."

The United substitutes sat below the press box in Cologne (Image: Samuel Luckhurst) The most detailed insight came via Kieran McKenna, who spoke at such a meticulous length it was impossible to fully document his comments and he triggered the press that ended with Greenwood's offside finish. On the pitch, Harry Maguire's foresight was perceptive and appreciated by Paul Pogba.

McTominay - more vocal than most of the starting players - smacked his chair in annoyance at Eric Bailly's yellow card Fred was visibly frustrated at the timing of his withdrawal as he trudged up the steps. He took his boots off and muttered something that caused De Gea to swivel his head for a repeat, only for Fred to apologetically hold up a tired hand. Staff and players put their hands on their heads in disbelief at an underhit Bruno Fernandes pass.

Read More Related Articles Victor Lindelof makes admission after Europa League win Read More Related Articles Why United rested Nemanja Matic and Victor Lindelof from the start Solskjaer had to remind Teden Mengi and Timothy Fosu-Mensah to stay alert amid the unlikelihood they could come on in extra-time, with both still sat in the stands upon confirmation of extra-time. Mata was as engaged as Solskjaer used to be as a substitute and it is why he is such a valuable game-changer.

Ighalo was about as unhurried as Dimitar Berbatov in preparing to warm up that one wondered whether he had heard the goalkeeping coach Richard Hartis. He had and given the temperatures were still north of 30 could be forgiven for not overexerting himself. United chose to put Ighalo on for the final seconds but he had not vacated his seat by the time the referee signalled the end.