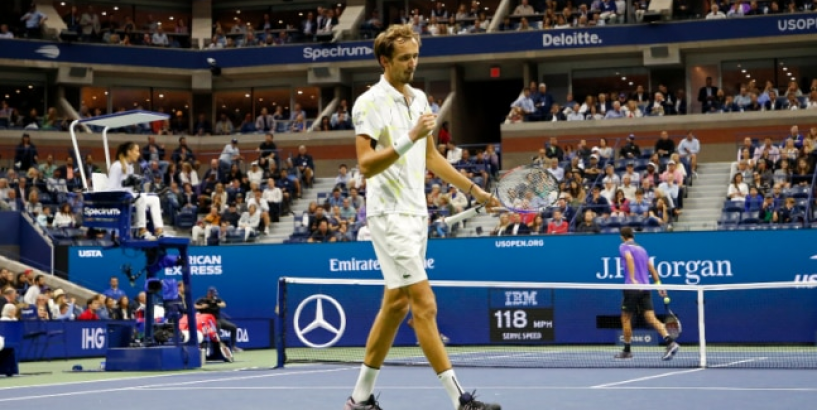 Every point between Daniil Medvedev and Grigor Dimitrov was contested as if a trophy were riding on it (Reuters Photo) HIGHLIGHTS Medvedev beat Dimitrov 7-6(5) 6-4 6-3 in the first men's singles semi-final The win sends Medvedev through to his fourth straight final and stretches his win streak to 12 matches Medvedev is the first Russian player to reach a Grand Slam final since Marat Safin at the 2005 Australian Open Daniil Medvedev will play for a first Grand Slam title after grinding out a 7-6(5) 6-4 6-3 win over Grigor Dimitrov in their US Open semi-final on Friday.

Medvedev has had a complicated relationship with the Flushing Meadows crowds, who cast him as a US Open bad boy following some on-court antics, but the fifth seeded Russian has been as good as gold where it matters on the scoreboard.

The win sends Medvedev through to his fourth straight final and stretches his win streak to 12 matches.

The first Russian man to reach a Grand Slam final since Marat Safin at the 2005 Australian Open, Medvedev now awaits the winner of the other semi-final between three-time champion Rafa Nadal and surprise package Matteo Berrettini of Italy.

The 78th ranked Dimitrov's play was trending downwards, winning just one of his last eight matches, while Medvedev was riding the momentum from reaching three straight finals, including a win in his last US Open tuneup in Cincinnati.

With both men fighting for a spot in their first Grand Slam final, every point was contested as if a trophy were riding on it, particularly in a tense opening set that stretched to an hour before Medvedev snatched it in a tie-break.

The second set produced more long, grinding rallies as the Russian and Bulgarian traded a pair of breaks before Medvedev landed the decisive blow to break Dimitrov and go 2-1 up.

Now in command, Medvedev continued to relentlessly wear down the tiring Dimitrov in a third set that saw him earn a break at 3-1 to take a lead he would not surrender.