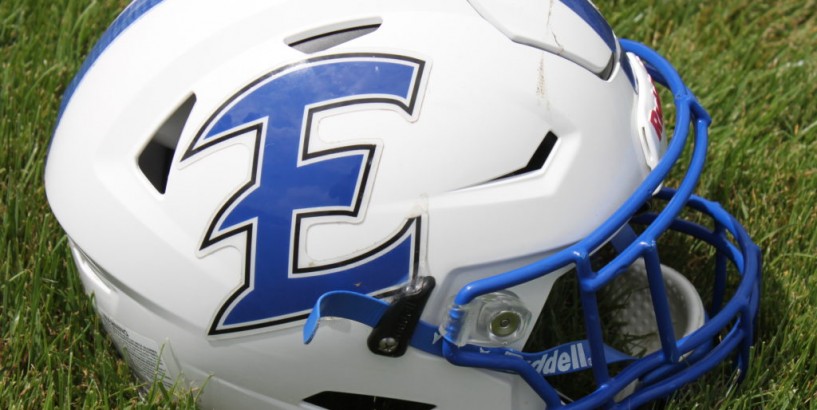 When a team throws two long touchdowns on its first two passes of the game, it will more often than not come out victorious.

The Elizabethtown Area High School football team had to fight longer than initially thought for it, but the Bears did just that in their second game of the season at Dover on Friday, Aug. 30, winning 47-32 in a non-league shootout thanks to three TD connections between sophomore quarterback Pat Gilhool and senior wideout Cole Rice, all the more impressive considering that the two are starting in their respective positions for the first time this year.

“We knew (Dover) was big up front, so we were gonna have to throw the ball a little bit to start with,” head coach Andy Breault said. “The playmakers made plays tonight.”

“It’s been great working with (Rice),” Gilhool said. “I just know where he’s gonna be at the exact moment when I throw it to him. He makes plays. On that second one, it wasn’t the best throw, but he caught it and scored a touchdown off of it. It was pretty fun.”

“I give credit to Coach Breault for drawing up good plays,” Rice said. “Got to give credit to the line; they were holding their blocks really well at the beginning of the half. And Pat always gets his passes out without underthrowing them or anything. They were playing man the whole game, so it was easy to pick up what routes to run.”

The fireworks started on the third play of the game. Sitting on third-and-long after a sack, Gilhool fit a deep ball perfectly between two defenders to Rice, who burst through and went the distance from there. It was a 72-yard tone-setter that firmly gave control of the game to Elizabethtown.

“They were playing man, so I ran a 10-yard out, took three steps, saw the safety bite and turned back in,” Rice said. “Pat got it to me right where it needed to be, and I just turned on the wheels from there.”

“All I had to see was that safety would bite on the fake,” Gilhool said. “It was a post, so when he bit, I threw it to right to Rice, and he did the rest.”

Dover picked up one first down before stalling on its opening series; a pooch punt from senior QB Justin Johnson proved disastrous, going just 14 yards before sailing out of bounds at the Eagles 40-yard line. The Bears struck fast; on the first play of the next drive, Gilhool found Rice on an out route, who juked the incoming safety out of shoes and waltzed in for an easy score. After just four plays, Gilhool was 2-for-2 for 112 yards and a pair of TDs to Rice.

“Pat underthrew it a little bit, but I adjusted on the corner route,” Rice said. “Stopped the brakes, made a man miss and it was off to the races.”

The Eagles got going after getting the ball back, methodically driving down the field and converting three third-down attempts en route to a 3-yard TD run from junior running back Cam Fetrow with under two minutes to go in the first quarter.

Elizabethtown kept the pressure on, however. Senior Cole Hitz returned the kickoff out to the Bears 41 and later pulled down a 33-yard bomb from Gilhool on third-and-nine to extend the drive. Gilhool scampered 17 yards for another first on a third-and-short to start the second, setting up a 2-yard TD run for senior Leon Allen, giving the Bears a 21-7 advantage.

Dover looked to have made a dent in Elizabethtown’s armor with a deep pass from Johnson to junior Matthew Hoffman, but a holding penalty forced another third-down try. The Eagles came through on a 21-yard throw to senior David Patterson.

It ultimately didn’t matter; junior Jett Kelly strip-sacked Johnson on the following play and senior Joe Sikora recovered the fumble at the Eagles 38 for Elizabethtown. Rice would make a circus catch for 33 yards on the first play of the ensuing series, and Gilhool ran in for a TD from 5-yards out on a QB keeper immediately afterward.

The Eagles drove into Bears territory on the next drive thanks to some catch-and-runs but were stymied on a third-down sack from sophomore Riley Runnels. They went for it on fourth down, but Hitz made a diving play to break up the pass to force a turnover on downs. Gilhool connected with sophomore tight end Brandonn Frey on third down during the following Elizabethtown possession but was intercepted on a deep ball to Rice by junior Tanner Linker at the Dover 13.

The field position would backfire on the Eagles; on the second play of the drive, Johnson was strip-sacked for the second time, this time by junior Elijah Reitmeyer. Senior Adnan Traore scooped up the ball and walked in for an easy 6-yard TD return, putting up Elizabethtown 35-7.

Dover did not fade away though, driving into Bears territory late in the first half. Hoffman pulled down a 31-yard pass to put the Eagles at the 1-yard line with 10 seconds remaining, and Johnson scored on a sneak from there. The point-after kick was blocked by junior Bobby Walters, but the Eagles had managed to cut the score to 35-13 before the break.

They came out firing to start the third, as Johnson hooked up with junior Shane Klinedinst on the second play of the half for a 63-yard TD. Dover’s defense also forced a three-and-out, leading to Elizabethtown’s first punt of the night.

A Kelly sack on the next series appeared to have halted the Eagles again, but Johnson found Linker on third-and-long to keep the drive alive. He would later convert two other third-down tries with his legs (one on a scramble, the other on a sneak), setting up a 1-yard TD run for junior Bryce Miller. Dover went for two to try and make it a one-score game, but Hitz came up with a pass breakup to keep the score at 35-26.

Rice put the Bears in strong field position by returning the ensuing kickoff to their 44-yard line. Allen converted a third-and-short run, followed by another third-down pass from Gilhool to junior Brock Belmont to close out the third period. Belmont was rewarded with a 20-yard TD catch early in the fourth, though the point-after kick from junior Cade Denlinger fell short.

Klinedinst struck again for Dover on the first play of the next drive, putting his team in Elizabethtown territory with a 56-yard catch-and-run. Fetrow would score for the second time on the ground, this time from a yard out, shortly afterward, but another two-point pass was broken up, allowing the Bears to maintain a two-possession lead.

On a third-and-forever try, Gilhool overthrew Rice and was picked off again by Linker. Kelly made back-to-back tackles for loss to slow the Eagles down though, and he and Traore teamed up for a fourth-down sack to give the Bears the ball back, though they had to punt after a botched snap on second down and a dropped pass on third.

A 34-yard pass to Fetrow and a 23-yard pass to Miller set Dover up in the red zone, but the Eagles’ comeback attempt was not to be. Johnson scrambled for what looked like a first down before Traore and junior Riley Drager forced the ball free, with Rice scooping up the fumble for Elizabethtown.

Trying to run down the clock, the Bears were hit with a third-and-long attempt after a holding call. They decided to throw for the first to ice the game. Rice did more than that, reeling in a throw to the markers from Gilhool, bouncing off a tackle and running 79 yards for a game-seeling TD. Dover turned the ball over on downs after a sack from junior Gavin Gray on the next drive, and a kneel-down from Gilhool conclusively ended things from there.

“I was just going for the first-down sticks,” Rice said. “As soon as I turned, the corner came up bulleting in with his shoulder and didn’t wrap up. (Senior) Anthony Pagan had a good block downfield, and Frey had a good block when I cut back in. I lost a little gas at the end, so I had to dive into the end zone.”

After a mixed first outing, Elizabethtown’s passing game was back to its usual dangerous self in this one. Gilhool threw for 307 yards and 4 TDs on 12 for 22 passing. The two interceptions were really his only poor passes. He had 20 rushing yards and another TD on 8 carries as well. Rice had 5 catches for a whopping 224 yards and the three scores. Four of those receptions went for over 30 yards.

“He’s just crazy,” Gilhool said. “You can tell he’s been playing for a long time. He just knows how to do everything, and it’s obviously great having him as a teammate.”

“They’re the same plays we were running last year,” Breault said. “In certain situations, we use them, especially when it’s one-on-one coverage.”

Elsewhere, Belmont finished with 4 catches for 39 yards and a TD. Allen ran for 31 yards and a score on 6 carries.

The defense was led by Kelly and Traore, who each had double-digit tackles and a forced fumble. The former finished with a game-high 15 tackles, 5 of them sacks, while the latter had 11 tackles and a sack. Rice and Drager both had 9 tackles and 2 pass breakups as well.

“Those two guys’ motors never stop,” Breault said. “The whole interior line on our defense is fighting hard. We were undersized out there tonight, so for those guys to come out and get that many sacks was big. Dover didn’t have a lot of rushing yards, so we did well stopping the run too.”

With a 2-0 record to start the season, Elizabethtown will have its home opener on Friday, Sept. 6, in another non-league contest vs. Conrad Weiser. The Scouts surprisingly lost both of their first two games, but they handled the Bears in Robesonia last season, so they’ll be itching to do the same this time around. E-Town will have plenty to think about during preparation. Improving penalties will be high on that list; the Bears have been whistled for 20 thus far, accounting for 155 yards.

“We got to clean things up,” Breault said. “Conrad Weiser’s a fundamentally sound team, and when you have penalties like that, it’s gonna be hard to come out with a win.”

“We have to be on the same page every play,” Gilhool said. “On the second pick, Cole ran a different route from what I was expecting. It happens, but that’s something we both need to correct before next week.”

“We can’t get too overexcited,” Rice said. “At the half, we were thinking about being up too much. We got to keep pushing to come out better.”

Another item on the to-do list? Staying hydrated. A number of Bears went down to cramps against Dover, though all of them were able to come back into the game.

“It was a little hotter tonight than earlier in the week,” Breault said. “I was getting sore just walking up the sideline.”