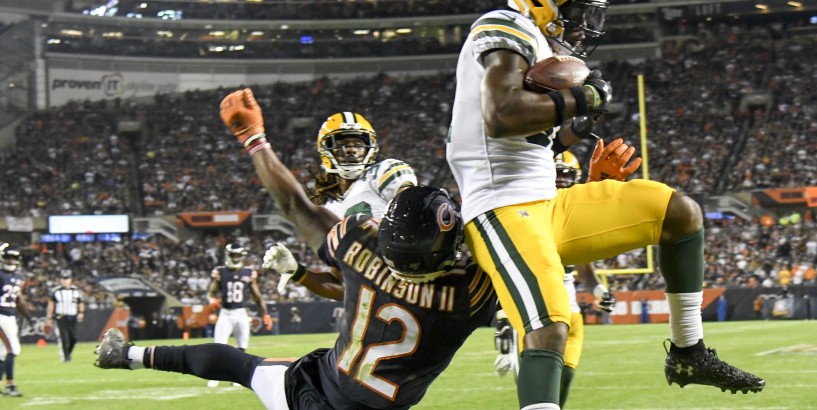 Thursday's NFL: Packers clamp down on Bears in opener

Chicago — Aaron Rodgers doesn’t have to lay waste to a defense to enjoy Packers football. He sure had a good time seeing what his guys on the other side of the ball did Thursday night to the archrival Bears.

“Yeah, it was fun to watch,” Rodgers said after Green Bay opened the NFL’s 100th season with a 10-3 victory over Chicago. “It’s been a long time since I’ve seen a performance like that. Obviously, a lot of credit to Mike Pettine and his staff, but to those players, just incredible.

“We didn’t do them a whole lot of favors with our performance on offense. I mean every time we needed something a stop, they came up with some really big plays.”

It was a defensive battle also marked by sloppy offense and penalties. A lack of action in the preseason clearly damaged both offenses, and Rodgers at times looked uncomfortable in the attack designed by new coach Matt LaFleur. But he is a two-time league MVP, and he hit Jimmy Graham in the second quarter for the only touchdown.

That aggressive Green Bay defense would have made Vince Lombardi proud in the latest edition of the NFL’s longest rivalry, which the Packers lead 98-95-6. Green Bay has won 16 of the last 19 regular-season meetings, and Rodgers is 17-5.

Chicago’s defense hardly slacked, getting five sacks — tying the most it has had against Rodgers. But it could do little with the ball and the Packers had five sacks of Mitchell Trubisky, who never found his stride, and was sacked on Chicago’s final offensive play. Former Bears safety Adrian Amos picked off an end-zone pass into double coverage with 1:58 remaining, the only turnover of the contest.

“It feels real good,” Amos said. “It feels great to come back to win and how we did as a defense.”

Mason Crosby made a 39-yard field goal in the final period for Green Bay, while defending NFC North champion Chicago got a 38-yarder from Eddy Pineiro.

The NFL opted to go for a history-tinged opener rather than having the Super Bowl champions host the first game. New England will be at home to Pittsburgh on Sunday night, and it’s unlikely that game will be so dominated by 'D.'

Each team had 10 penalties, there was a total of 467 yards of only offense, and several drops. At one point, Chicago had three straight penalties to put it in a first-and-40. No, the Bears didn’t convert.

Still, take nothing away from either defense. They both controlled the line of scrimmage almost throughout the night, and Trubisky was particularly bothered by it, going 26 of 45 for 228 yards.

Rodgers was 18-for-30 for 203 yards, hardly vintage A-Rod, and certainly unlike his performance in leading the Packers back from a 20-point hole in the second half of the 2018 opener against the Bears.

Of course, he had all that support Thursday night from the likes of newcomers Preston Smith (1.5 sacks), and Za’Darius Smith (a sack), enough to give Green Bay the boost it needed.

The opening series couldn’t have been uglier for Green Bay. A run and a pass netted zero yards, then Rodgers was sacked heavily by Roy Robertson-Harris for a 10-yard loss.

Well, maybe it could. Rodgers was sacked again on the next three-and-out and Chicago took over at the Packers 36 after a punt. Chicago had forced 17 yards in losses on those series, and the Packers had minus-12 yards through one period.

Rodgers erased such ineffectiveness quickly at the start of the second quarter, launching a 47-yard completion to Marquez Valdes-Scantling. Two more completions got the Pack to the 8, and Graham did what most former basketball players turned tight ends should, winning a jump ball in the end zone.

By halftime, Green Bay had outgained Chicago 119 yards to 98.

The video was disseminated by an organization called Focus on the Family, which has promoted policies widely viewed as hostile to the LGBTQ community.

Brees said his only intention was to encourage Christian students to practice their faith with confidence on National Bring Your Bible to School Day.

Brees said he was not aware “at all” that Focus on the Family was associated with anti-gay messaging, inequality or “any type of hate.”

The record-setting quarterback says he sees Christianity as representing love, forgiveness, respecting all and accepting all.

... Tight end Tyler Higbee agreed to a four-year contract extension worth $31.025 million with the Rams.

... Suffering a dearth of bidders amid skyrocketing franchise values, the NFL is mulling ownership rule changes designed to attract buyers outside of the richest of the rich.

... The NFL, L.A. Rams and team owner Stan Kroenke are asking the U.S. Supreme Court to consider why a lawsuit over the team’s departure from St. Louis should be settled in arbitration, not open court.