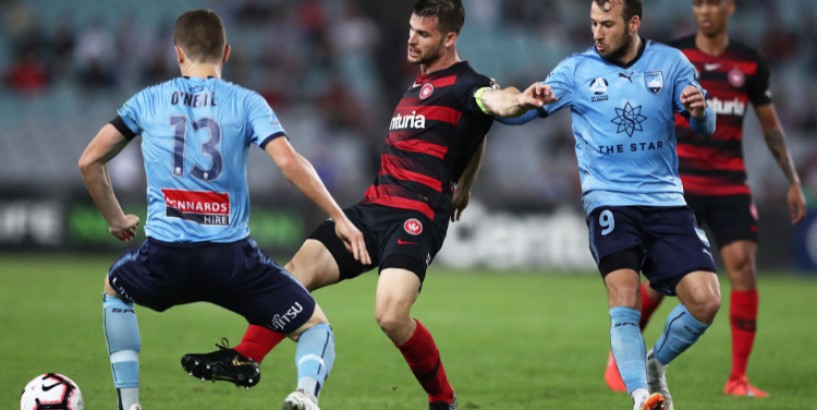 Frustrated Sydney FC are clinging to hope and vowing to be ready to complete a potentially record-breaking A-League season.

The Sky Blues looked almost certain to win a record fourth Premiers Plate before the competition was postponed on Tuesday, the last major sporting casualty of the coronavirus pandemic.

Third-placed Wellington Phoenix have played the same amount of games as Sydney, but trail them by 12 points, meaning the Sky Blues needed a maximum of seven points with six games to play to secure the Plate.

Winning all of those games would give Sydney a final tally of 66 points, equalling their own league season record set in 2016-17.

However, teams were playing just 26 games this season compared to the 27 they have contested for the past eight seasons and 64 points would give Sydney the best points per game ratio in A-League history.

"We were still on track to reach a record-breaking season and we were very, very close to winning a trophy," Sydney captain and defender Alex Wilkinson told AAP.

"Players come in in July, for pre-season and set our goals and set out what we want to achieve and silverware is usually a big part of that, so to be so close is frustrating and disappointing, but we're all hopeful that the season is not over.

"We as players all would love to finish the season whether it's in a month, two months, three months.

"We're all holding out hope that we can get it done at some stage."

Should the season be completed and Sydney win the grand final they will collect a record fifth title, taking them ahead of Melbourne Victory, with who they also share the record for the most Premiers Plate's.

Sydney were scheduled to play at Brisbane on Wednesday before the FFA postponed the season the day before.

"We left training on Monday with our itinerary and we were planning on training Tuesday morning and then flying in the afternoon,"' Wilkinson said

"The message was 'come packed ready to go and train then head to Brisbane.'

"But as Monday went on and the press conference on Tuesday morning finalised everything, that all changed."

"It was a little bit eerie to be honest, while walking out it was completely silen," Wilkinson said.