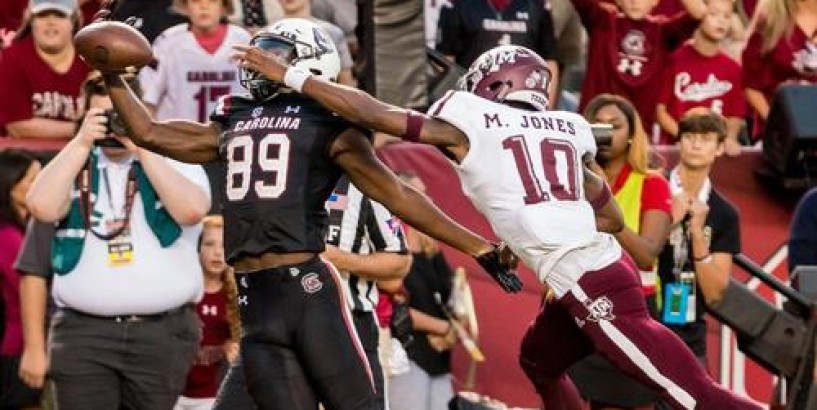 The Raiders emphasized surrounding Derek Carr with weapons in the 2020 NFL Draft, utilizing three of the team's first four draft picks on offensive skill players. Henry Ruggs, Bryan Edwards and Lynn Bowden Jr. each bring a unique skill set, and all likely will factor into Las Vegas' gameplan this fall as the organization looks to improve on a disappointing 7-9 record in 2019.

Edwards, the Raiders' third-round pick in April, is a South Carolina product who had a habit for making spectacular catches week in and week out for the Gamecocks. In the first week of Raiders training camp, Carr has seen flashes of a former teammate turned analyst for the NFL Network, James Jones.

"I'm not gonna lie to you, Bryan Edwards reminds me a lot of you James," Carr told Jones and David Carr on NFL Network's "Inside Training Camp LIVE" Thursday. "Obviously not as fast, right James you're 4.3 (speed in the 40-yard dash). There's a lot of times that we were playing with that back-shoulder fade, that you and I would connect on for at least the first three weeks, until Rod (Streater) got hurt. But we were throwing the heck out of the jump balls, the back-shoulder fades, all those kinds of things.

"He reminds me of that guy that I can trust and that guy that I can just throw that ball up to and know that he's going to get it or no one is. And he's done a fantastic job of proving that every day in one-on-ones, and proving it every day in our team drills. And every time I correct him or things like that, he does exactly what I ask him to do. So, the kid is special."

Edwards finished his college career with 234 catches, 3,045 receiving yards and 22 touchdowns. Listed at 6-foot-3, 212 pounds during his time with South Carolina, Edwards is much bigger than the typical college wideout.

Carr hasn't had a legitimate No. 1 threat at receiver since Amari Cooper was traded in 2018. Antonio Brown was thought to be that next elite pass-catcher to wear the Silver and Black, but a flurry of off-the-field issues kept the controversial All-Pro from seeing any on-field action for the Raiders.

If Edwards can continue to improve and become a security blanket, he can provide Carr with something even AB couldn't deliver: an ability to leap over smaller cornerbacks and use his size to overpower defensive backs. Ruggs might be the talk of the draft class, but don't be surprised if Edwards hauls in a handful of touchdowns in the franchise's inaugural season in Las Vegas.