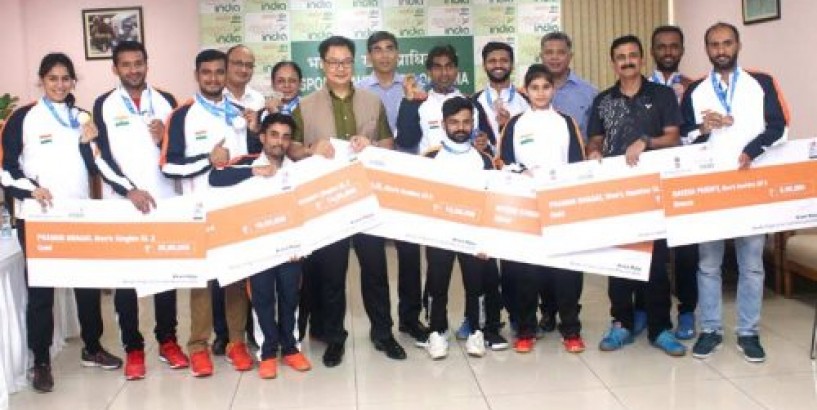 Para-shuttlers bag a total of 12 medals in world championship

Hyderabad: It was indeed a proud moment for the country when ace shuttler PV Sindhu and B Sai Praneeth clinched historic gold and bronze medals in the BWF World Championship in Basel, Switzerland. However, far away from the limelight, a few other Indians were busy chasing history at the same venue on the same day. The para-shuttlers, away from media attention, bagged a total of 12 medals, including three gold, five silver and four bronze in the BWF Para-Badminton World Championship, their second-best performance after the 2015 Worlds.

Men’s singles player Pramod Bhagat was the star of the show, winning two gold medals in men’s singles in SL3 and men’s doubles in SL 3-4 categories. Manasi Joshi also hogged the limelight by winning a memorable gold in the women’s singles SL3 final, becoming the world champion, like Sindhu did! Manasi defeated the World No. 1 and compatriot Parul Parmar 21-12, 21-7 to clinch the title. Interestingly, Sindhu and Manasi are training at the Pullela Gopichand Academy in Gachibowli.

Talking about the victory, the 30-year-old electrical engineer from Mumbai, Manasi said it was a remarkable experience to play at the same venue where the likes of Sindhu and Momota were seen in action. “The competition was very tough. I was well-prepared this time. I was working on my strokes, fitness and I was mentally tougher,” she said.

Two months before the tournament, Manasi was working with coach J Rajendra Kumar and trainer L Raju from Gopichand Academy in Gachibowli. She admits that it made a big difference in her game. “Gopi sir (P Gopichand) has always supported me. He came to see all my matches except the final as it was an all-Indian affair,” Manasi added. The next target for Manasi is to win a yellow medal for the country in the 2020 Tokyo Paralympics.

Sukant Kadam, the World. No.3 in men’s singles and bronze winner in the World Championship feels that exciting times are coming ahead for India in para-badminton. “We have got a bunch of excellent players. For the first time, our game is a part of Paralympics. I am a beneficiary of the TOPS programme and I am training hard to win a medal for the country,” Sukant, who won a bronze medal in the SL 4 category said.

Men’s doubles bronze medallist Vikram Umesh is also pinning hopes on 2020 Paralympics. “The qualification rules appear to be tough. But, I feel determined. I defeated some big players in the Worlds which is giving me confidence,” Vikram added.

“We all felt very happy after meeting Union Sports Minister Kiren Rijiju. The Minister joined us for lunch. He offered us all the necessary help. We feel confident as a unit. Para games are not only about winning medals, but it is a platform to express ourselves. We will keep trying hard for the best,” Sukant added.