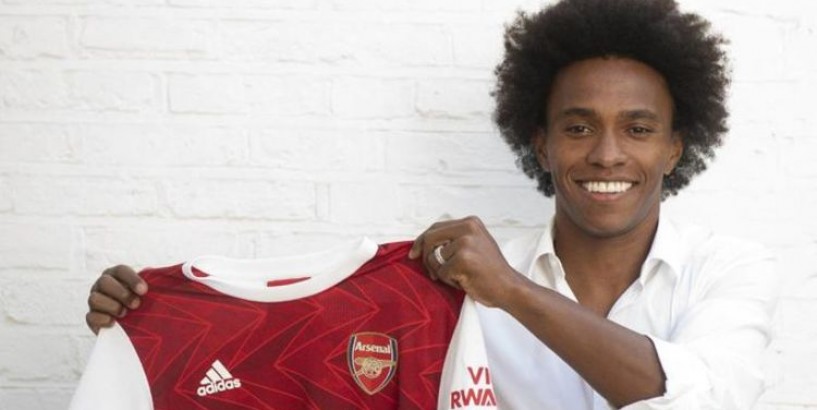 Arsenal ’s new signing Willian has decided to follow in Thierry Henry’s footsteps by picking a squad number previously worn by the French icon. Willian signed a three-year contract at The Emirates on Friday.

The Brazilian winger, who left Chelsea at the end of his contract this week, will earn a reported £220,000-per-week.

The winger wore the number 10 shirt at Stamford Bridge, but Mesut Ozil currently occupies that number at Arsenal.

Instead, he opted for number 12, the shirt previously worn by Stephan Lichensteiner .

Olivier Giroud had the number before that, having taken over from Henry.

Henry returned to the Emirates on loan from New York Red Bulls in 2011, but his usual number 14 shirt was taken by Theo Walcott.

Instead, he took the number 12, and scored two goals in seven games during his short-term loan.

Willian could end up taking back his usual shirt number next summer, with Ozil expected to leave the club.

The German playmaker recently insisted he will be seeing out the remainder of his £350,000-per-week deal at the Emirates, and won’t be pressured into leaving beforehand.

Gunners chiefs are believed to be keen to move him on this summer in order to get his wages off their books, as he is the club’s highest-earning player.

Despite his lofty wages, a reported rift with club chiefs has meant he has been watching from the sidelines in recent months.

Ozil has only played 18 times in the Premier League this campaign, and missed the closing end of the season with ‘back issues’, though he was fit enough to be included on the bench against Brighton and Southampton.

The 31-year-old's position in the team is set to become even more unstable with the arrival of Willian, who can play anywhere across the front three behind a central striker.

Speaking after the deal was confirmed, Mikel Arteta conceded that the Brazilian ace was signed due to his versatility and ability to play in a variety of positions.

“I believe he’s a player that can really make a difference for us," Arteta said. "We have been monitoring him for the past few months, we had a clear intention to strengthen in the attacking midfielder and the winger positions [and] he is a player that gives us a lot of versatility, he can play in three or four different positions.

“He has the experience of everything in the football world but to still have the ambition to come here and contribute to bring the club where it belongs.

“I have been really impressed with all the talks I have had with him and how much he wanted to come.”