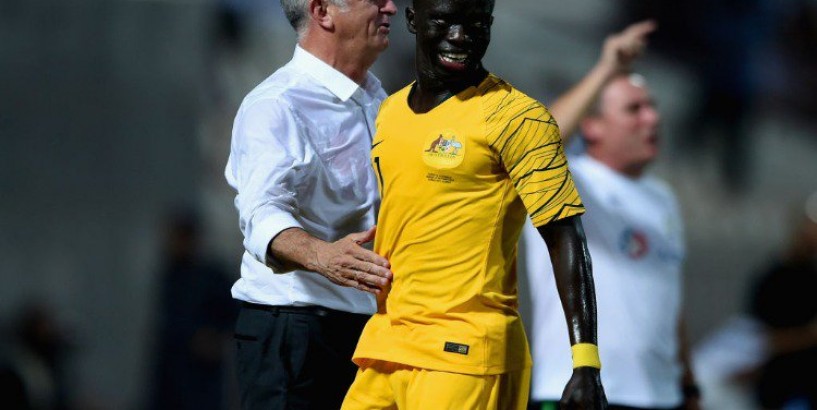 Socceroos winger Awer Mabil is nervous about kicking off his maiden World Cup campaign next week, but feels he's at the stage to deliver for Australia.

The speedster, who has scored four goals in 10 appearances for Australia, has joined the quest for a berth in Qatar in 2022, which starts against Kuwait at 1:30am AEST on Wednesday.

Mabil will take a lot of confidence from a strong campaign with his Danish Superliga side Midtjylland, who are undefeated and top of the table after winning seven of their eight matches since July.

The 23-year-old starting nine of Midtjylland's 10 matches in all competitions and chipped in with a goal against Scotland's Rangers in the Europa League and an assist in the Superliga.

While World Cup campaign is bigger even responsibility, the in-form winger feels he's learned enough from his senior teammates to be expected to deliver for his country.

"Obviously I've taken a lot of things from the attacking players: Leckie, Kruse, Tom (Rogic), Aaron (Mooy), all these guys," Mabil told the FFA on Saturday.

"They're a great example because they've been here for years and they've been doing it so I'm trying to learn as much as I can from them, and you know these guys, and the whole team behind us, the defence, the midfielders, (captain) Mark (Milligan), Trent (Sainsbury), all these guys play a big part in our team."

"As a young player you can only just sit back and observe them and try to learn because they have so much to offer and it depends how you take it onboard and I think I am an observer and I observe a lot, and I think I'm ready for the next stage."

Mabil is still nervous about the match, despite scoring in Australia's 4-0 win over Kuwait in their last meeting, but he thinks that could be a positive.

"I'm nervous for the World Cup qualifiers because it's my first and I've watched it on TV, you know people going through the World Cup phases and to be part of it now at the start of it is (making me) nervous, but at the same time I'm ready to capitalise on that nerve," he said.