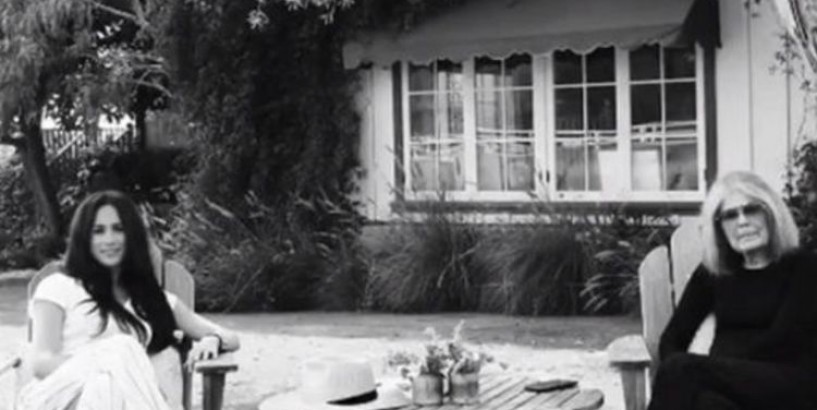 The Duke and Duchess of Sussex shocked the world back in January by announcing they planned to step down as senior members of the royal family. After a brief stay in Canada the couple settled in Meghan’s home state of California.

Trending They recently purchased and moved into a £11.2m Montecito community property in Barbara County.

The town is about 95 miles of Los Angeles where the couple had been living in a borrowed home.

The pair discussed women’s rights, why people should vote and how political representation works.

View this post on Instagram discuss representation, why each vote matters and how all women “are linked, not ranked." MAKERS has an exclusive look at that historic backyard chat! Q&A to come tomorrow.

A short clip was posted by the charity ahead of the interviews full release later this week.

At one-point Ms Steinem expressed her joy at having the Duchess back in California.

She commented: “Meg, welcome home, I'm so glad that you're home.”

Ms Steinem expressed her joy at having the Duchess back in California (Image: GETTY) Related articles Meghan Markle and Prince Harry invited to Hollywood star’s home Meghan Markle revealed to be using her face mask to support causes “Me too, for so many reasons.”

Following her marriage to Prince Harry in May 2018 Meghan spent nearly a year and a half living in the UK.

However in January both the Duke and Duchess announced they were standing down as senior members of the Royal family.

Instead the couple pledged to become “financially independent” whilst splitting their time between North America and Britain.

Meghan and Harry are now living in Los Angeles after moving from Frogmore Cottage (Image: GETTY) Last year Meghan admitted in an interview with ITV’s Tom Bradby that she was struggling to “thrive” and “feel happy” within the royal family.

The Duchess claimed she “really tried” to adopt the British stiff-upper lip but found this “internally really damaging”.

Before stepping down as senior royals Harry and Meghan lived in Frogmore Cottage near Windsor.

The couple have pledged to repay the taxpayer money that was spent renovating the property before their shock departure.

Meghan and Harry married in 2018 after a whirlwind romance (Image: EXPRESS) Ms Steinem gained recognition as a leading feminist in the late 1960s and early 1970s.

She co-founded the ‘Ms’ magazine and published “After Black Power, Women’s Liberation” in 1969.

The two women sat on wooden chairs with a table placed in between, possibly to try and ensure social distancing.

The Duke and Duchess of Sussex stepped down as senior royals (Image: GETTY) Related articles Sophie Countess of Wessex royal first on Good Housekeeping cover Meghan and Harry abandoned royal life to seek 'ideal lifestyle' in US There is speculation the interview, which was recorded last month, took place at Meghan and Harry’s new house due to the presence of their dogs.

Pula, Meghan’s black Labrador, and Guy, a rescued beagle, both wondered into shot and lay in-front of the Duchess.

In their description of the event Makers Women said: “Meghan, The Duchess of Sussex and Gloria Steinem discuss representation, why each vote matters and how all women ‘are linked, not ranked’”.