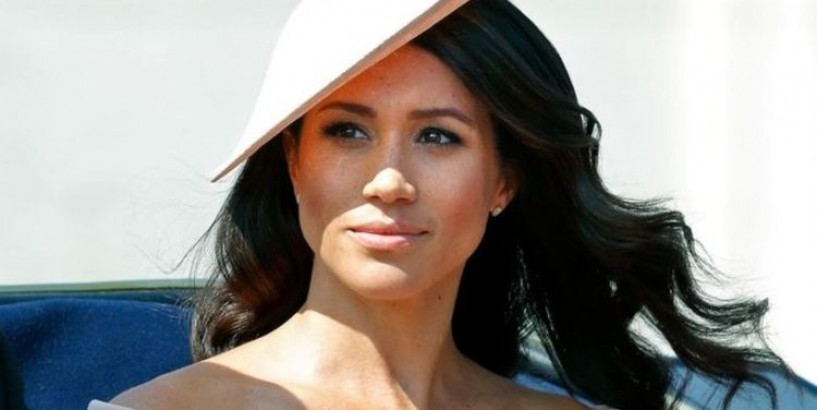 Meghan, the Duchess of Sussex, appeared star struck when she met Ms Steinem for the “backyard chat”. The pair spoke about women’s rights, representation and voting in November's election.

Trending The interview was filmed last month for the female empowerment platform, Makers Women, and is set to be fully released on Wednesday.

In a short teaser clip, viewers have been given a glimpse of the discussion.

Ms Steinem shared her opinions on the upcoming US election as the Duchess expressed her beliefs that there needs to be a change to the current administration.

Meghan Markle citizenship: The Duchess has solely US citizenship (Image: getty) The interview comes as Royal fans have taken to Twitter to debate the Duchess’ citizenship after she made it clear she will be voting in the presidential election.

One social media Quote: : “She is still an American Citizen & this is the most critical Presidential election of her lifetime & mine.

“Please remember her son will also have this citizenship.

“It may be against the rules but this is about civic duty.”

Meghan Markle citizenship: Meghan appeared star struck when she met Gloria Steinem (Image: getty) Related articles Princess Diana tribute: How Kate and Meghan made subtle nod to Diana Meghan Markle and Prince Harry invited to Hollywood star’s home The royal fan was responding to Piers Morgan’s previous Tweet where he called on the Duchess to give up her royal title.

Mr Quote: : “If Ms Markle wants to make a real moral stand, I suggest she gives up her Duchess title, and her father-in-law’s money, and stands on her own two feet.

“Her shocking disrespect for the Queen & the Monarchy, and the royal ‘rule book’, is outrageous.”

Another social media user expressed their joy that the Duchess kept her citizenship after marrying Prince Harry in the UK.

“Now the UK press (aka VERMIN) who have gaslighted & terrorized Meghan—an innocent girl—want everyone to join the witch hunt & blame her for the divisions & racial hatred that THEY invested in & started. NO.”

While another Twitter Quote: : “Did she surrender her US citizenship? No! As such, like EVERY CITIZEN, #MeghanMarkle enjoys the same protections and rights set forth in Constitution!”

Although she married into the British Royal Family, the Duchess of Sussex has solely US citizenship until she applies for British citizenship.

The Duchess has not specifically said which candidate she plans to vote for but has said she wants to see change in the White House.

Meghan Markle citizenship: The Duchess has not said which candidate she plans to vote for (Image: getty) Related articles Queen's confession on Prince Harry's 'over-exposure' before Megxit Meghan Markle can't be stripped of royal title unless Harry is too She said: “When I think about voting and why this is so exceptionally important for all of us, I would frame it as: We vote to honour those who came before us and to protect those who will come after us because that's what community is all about and that's specifically what this election is all about.

“We're only 75 days away from election day and that is so very close and yet there is so much work to be done in that amount of time because we all know what is at stake this year.

“I know it, I think all of you certainly know it. And if you're here on this fun event with us then you are just as mobilised and energised to see the change that we all need and deserve.”

The Duchess also highlighted the 100th anniversary of the 19th Amendment which gave women the right to vote but pointed out that women of colour had to wait decades more to earn the same right.

She said: “And as we look at things today, though it had taken decades longer for women of colour to get the right to vote, even today we are watching so many women in different communities who are marginalised still struggling to see that right come to fruition. And that is simply not OK.”