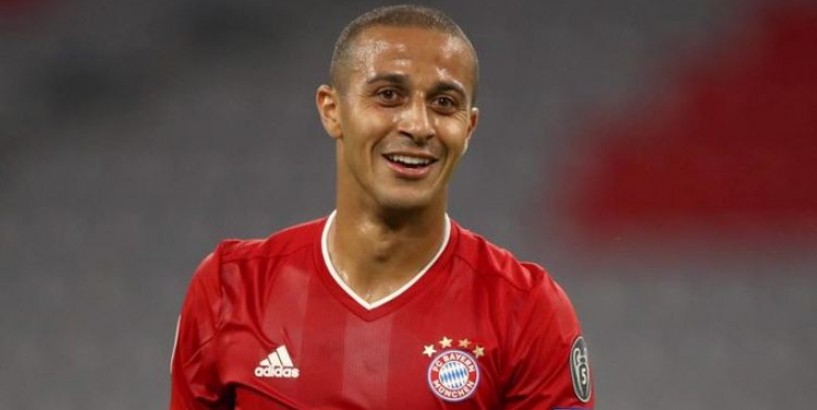 Liverpool should only make a move to sign Thiago this summer if they are able to get him on the cheap, as the Spanish midfielder would only act as a back-up to the Reds’ current midfield three. That’s the opinion of ESPN pundit Gab Marcotti, who believes Thiago shouldn’t be Jurgen Klopp’s priority.

Liverpool are still keen on Thiago.

The centre-midfielder looks set to leave Bayern Munich after telling the German champions he wants to leave.

The 29-year-old is out of contract next summer, so Bayern have to sell now if they want to avoid losing him on a free.

However, they don’t want to just give him away on the cheap, and are determined to get their asking price of £27million for him.

Liverpool, however, don’t want to pay that much for a midfielder of his age, and are trying to haggle with the nine-straight Bundesliga champions.

And Marcotti believes the Premier League champions should only pull the trigger on a bid if they are able to get the Spaniard for less than the £27m, because he would currently be a back-up option for them.

He explained on ESPN FC that if the Reds were to sign him, he would offer something different to Jordan Henderson and James Milner, but would be a back-up for those two midfielders.

Marcotti said: “Well the tricky thing is he’s got a contractual issue with Bayern right now.

“Would he be a fit for Liverpool? He would be a plan B.

“He would be a plan B for those games where Liverpool are playing against opponents who are sitting very deep and you need someone who needs to go and unlock the opposing defence.

“As good as Liverpool are, when you’re thinking about their creative players you’re talking about Firmino and Trent Alexander-Arnold. Then, really, that’s probably about it for individuals who can create spaces.

“I think they [Henderson and Milner] offer different things to what Thiago offers.

“If I have to go and spend £40 or £50m for a guy who has had major injury issues, plus what will probably be enormous wages because he’s at Bayern, I’d think twice about it.

“If I can afford it, and I can bring him in as a luxury situation, and I only need him for 20 or 30 games and I like the price, then yeah I’d take him.

“But I certainly wouldn’t make him my priority if I’m Liverpool.”