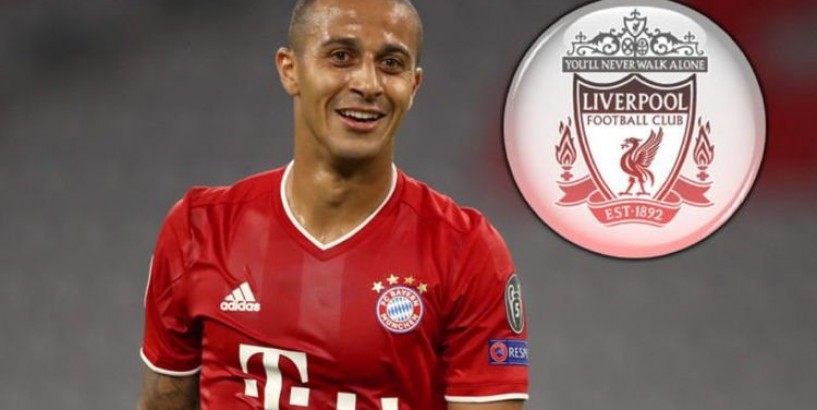 Liverpool do not have an alternative target for Thiago Alcantara if a deal cannot be done this summer, claims David Ornstein. The Bayern Munich midfielder has been heavily linked to Anfield in recent months.

Related articles Liverpool star tipped to quit and join Leeds because of Jurgen Klopp Liverpool transfer stance on Gini Wijnaldum with shock contract update Thiago has made it clear he would prefer to leave Germany this summer in search of a new challenge after seven years at the Allianz Arena.

The 29-year-old is a crucial part of the Bavarians' side and has helped them take their run of successive title triumphs to eight straight seasons.

But with just a year left on his contract, Thiago is keen to depart this summer - and it is believed he would love to link up with Jurgen Klopp at Liverpool.

A classy operator, Thiago is recognised as a world-class talent with his ability on the ball particularly eye catching.

And for that reason, The Athletic expert Ornstein does not believe that Liverpool will pursue a plan B if they cannot agree a deal to sign the former Barcelona playmaker this summer.

Liverpool stance on Thiago transfer plan B as Bayern Munich demand £45m for Spaniard (Image: GETTY) Ornstein adds that an agreement is unlikely with Bayern wanting around £45million (€50m) for Thiago despite previous suggestions they would accept around £30m.

Liverpool are highly unlikely to pay that fee having been put off signing RB Leipzig striker Timo Werner for a similar amount before Chelsea snapped up the German.

The Premier League champions are in greater need of more talent in the final third to provide back-up for the likes of Mohamed Salah, Sadio Mane and Roberto Firmino, while they are greater stocked in the middle and have Naby Keita, who plays in a similar role to that which Thiago would take up.

"How might it affect a potential move for Thiago? We know they occupy a similar position, we know Jurgen Klopp admires Thiago and we know Thiago by the sounds of it would love to come to Liverpool," Ornstein said on the Tifo Podcast's Ask Ornstein show .

"That's the easy part, the more difficult part is the finance. It's my understanding that Bayern Munich would want around €50million for Thiago, even though he only has a year left on his contract and even though he wants to leave.

Liverpool stance on Thiago transfer plan B as Bayern Munich demand £45m for Spaniard (Image: TIFO PODCAST) Related articles New Liverpool star reveals why he completed Anfield transfer Three players Liverpool could sign next after completing Tsimikas deal "They see the value that he presents to them as being worthwhile and they don't need to sell him. They could let him go as a free agent next summer without a problem.

"Liverpool will go nowhere near that valuation and that's a real problem. It means that this potential deal will probably rumble on right until the end of the window.

READ MORE Premier League done deals: Every confirmed transfer in the window "We'll hear lots in the media but there's definitely no guarantee that it will even get close. I think it's unlikely at this stage.

"I don't think Liverpool will look for an alternative player - he's a unique player that if you can get him, you take that opportunity. If you don't, maybe it's best to go with what you already have."

Liverpool have already made their first signing of the summer by bringing in left-back Kostas Tsimikas to provide competition for Andy Robertson.

The 24-year-old has cost the Reds around £11million and Klopp insists the Greek has a fighting mentality "fits perfectly with the mood and the desire" already in the Liverpool dressing room.

Ornstein added: "What we do know is that they've brought in a left back from Olympiakos, Kostas Tsimikas, that's a €13m deal and it was at the price that Liverpool wanted.

"They showed interest in Jamal Lewis from Norwich but that was rebuffed by Norwich.

Liverpool stance on Thiago transfer plan B as Bayern Munich demand £45m for Spaniard (Image: GETTY) Related articles Man Utd 'need' to sign Thiago as Liverpool transfer claim made Liverpool make summer transfer decision to fix Werner disappointment "People I've spoken to suggest Norwich were looking for a fee in excess of €20m and Liverpool have very clear valuations on players and how much they're willing to pay for a certain position.

"They do want back-up for Andy Robertson but they weren't going to push the boat out, their finances are restricted this summer.

"As much as they may admire Jamal Lewis and I understand his head was turned quite significantly by this interest, it's Tsimikas who will come in. He looks to be a good player.

"Elsewhere Liverpool don't have any significant plans for recruitment this summer, they may well react to situations and that could be determined by outgoings but that's the current situation as it stands and as my understanding."