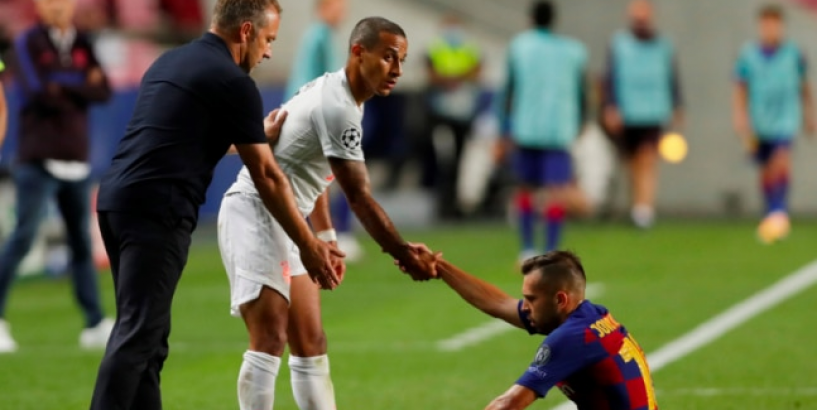 Let it sink in, analyse and then prepare for the semi-final: Bayern Munich manager Hansi Flick

Bayern Munich players will let their stunning 8-2 Champions League quarter-final victory sink in for a day but if they are to win the title they still need to work hard, coach Hansi Flick warned.

Flick, who was assistant coach of Germany in their historic 7-1 demolition of hosts Brazil en route to the World Cup title in 2014, said his players now needed to stay grounded ahead of a semi-final against either Manchester City or Olympique Lyonnais.

“You know that I do not look back because only the here and now matters,” Flick told reporters when asked about comparisons to Germany’s 2014 win.

“Yes, we played an outstanding game and we can be happy but we all know we still have hard work to do if we are to stand in the end where we want to stand,” he added.

Bayern have won the domestic league and Cup double and are looking to repeat their 2013 treble winning season.

“We know how quickly it can happen in football. We must recharge from tomorrow for the semi-finals,” Flick said.

On Friday the Bavarians had already scored four times in the first half against the Spanish former European champions, outclassing them with dizzying pace and quick breaks that left the Barca defence standing.

“It is a win and we wanted to reach semi-finals. OK, it is impressive, we set a small marker but the experienced players know that the next game awaits and we will need the same performance. Let it sink in, analyse and then prepare for the semi-final,” Flick said.