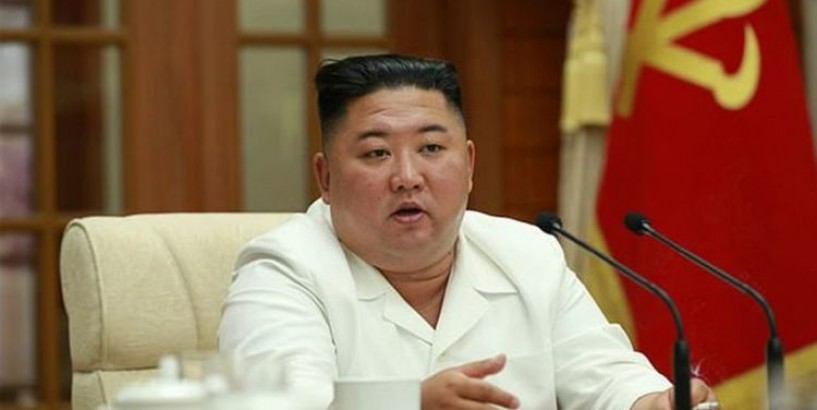 The allegation was made by South Korean diplomat Chang Song-min, who worked for the country’s former president Kim Dae-jung. Mr Chang alleged Kim has been in a coma since April.

Related articles Kim Jong-un: North Korean defector's take on propaganda department Typhoon Bavi: North Korea alert as images show churning eye of storm He added all photographs and video of his public appearances since then had been faked.

They appear to show Kim taking part in a meeting of the politburo of the Workers Party, the governing body of North Korea.

According to the KCNA the meeting was held to discuss the ongoing coronavirus crisis as well as the threat posed by an incoming typhoon.

The politburo meeting including Kim Jong-un (Image: KCNA) South Korea’s economy has been badly hit by recent flooding and the closure of borders due to the COVID-19 epidemic.

KCNA said the politburo meeting focused on “some defects in the state emergency anti-epidemic work for checking the inroads of the malignant virus”.

Until recently North Korea denied the country had any cases of coronavirus.

However last month Kim admitted the virus “could be said to have entered” North Korea.

Kim Yo-jong has been becoming increasingly prominent (Image: GETTY) Trending A three-week lockdown was imposed last month on the city of Kaesong, by the southern border, after a suspected COVID-19 case was detected.

More lockdown measures were imposed nationwide after a man claimed to have coronavirus symptoms but according to the World Health Organisation his results were inconclusive.

Speculation about Kim’s health has increased as a result of the increasingly prominent position taken by his sister, Kim Yo-jong.

Recently Ms Kim has taken the lead on diplomacy with South Korean and the United States.

North Korea is battling to restrain coronavirus (Image: GETTY) Back in June she ordered a joint liaison office North Korea ran with the South on their border to be blown up.

She also warned South Korea it could face unspecified military action though the threat was later withdrawn.

Mr Chang suggested Ms Kim’s increasing prominence would only have come about if her brother was seriously ill or a coup had taken place.

He said: “I assess him to be in a coma, but his life has not ended.

A complete succession structure has not been formed, so Kim Yo-jong is being brought to the fore as the vacuum cannot be maintained for a prolonged period.”

If this is the case recent pictures of Kim, including the latest from the politburo, must have been faked.

However Mr Chang’s allegations have been strongly criticised within South Korea with some commentators pointing out he made similar unproven remarks earlier in the year.

Both North and South Korea have been struggling from flooding in recent weeks (Image: GETTY)

They added Mr Chang was “greatly embarrassing” himself and trying to validate his prior opinions.

Korea was split at the end of WWII into Soviet and American dominated zones.

The former became North Korea and the latter South Korea, which became fully democratic in the 1980s.