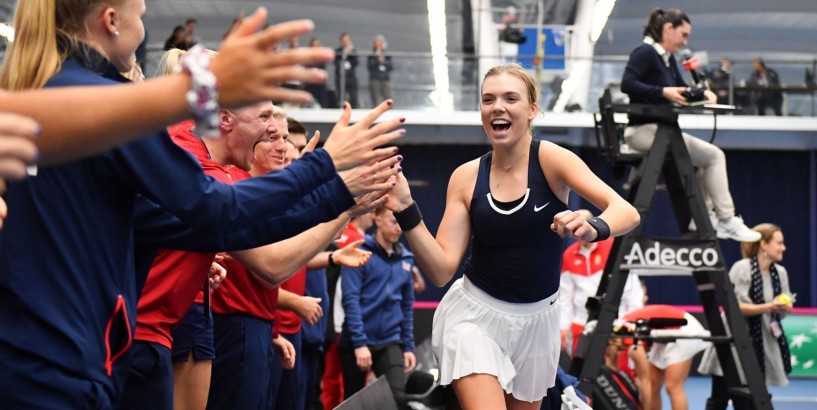 Great Britain came through another epic Fed Cup tussle with Johanna Konta sealing a win over Hungary and booking a place in the Europe/Africa play-off with Serbia on Saturday.

After Katie Boulter had required another three-set epic, her third of the week, to beat Dalma Galfi in the opening rubber on Friday, British No 1 Konta was forced to battle back from a break down in the third set of her match with Anna Bondar before sealing victory.

Four of the six sets played on the day went to tie-breaks and a finish past 11pm will mean a tough turnaround for Anne Keothavong's team, who as winners of Group A will now face Group B winners Serbia.

Image: Jo Konta dug deep to win her match with Anna Bondar Konta was pushed all the way by an inspired Bondar whose powerful serve won her a host of points but it was Konta who made the brighter start breaking Bondar's serve in the first game and never looked back.

Konta wasted nine break points in the second set and it cost her as Bondar levelled the match up with a dominant tie-break before a thrilling decider that also went the distance.

It was a marathon final set, where both players saved break points at key times, and Bondar taking the early initiative with the first break but Konta's experience eventually told as she prevailed in a nerve-shredding tie-break.

More from Fed Cup 2019 Katie Boulter and Johanna Konta inspire Great Britain to second Fed Cup win Earlier in the day, Boulter, the British No 2, got GB off to the perfect start.

— Katie Boulter (@KatieBoulter1) February 8, 2019 Having beaten Greece on Thursday after seeng off Slovenia on Wednesday in their first home tie in the tournament for 26 years , GB looked to be cruising when Boulter moved 5-1 in front before surviving a fightback to take the first set 6-4.

Galfi, the world no 311, claimed a second set tie-break before moving a break clear in the final set. Ultimately Boulter was to prevail.

Image: Boulter is making her Fed Cup debut "It was very difficult to keep my head straight and I just wanted to zone in again and put the towel on my head and focus on the floor a little bit and I thought I did well to bounce back," she said.

"My whole heart I put on that line there and I did the absolute best I could and it was just about enough."

We have the tennis season covered from all angles via our website skysports.com/tennis . On the move? Head to our app for mobile devices and iPad, or follow our Twitter account @SkySportsTennis to join in the conversation.