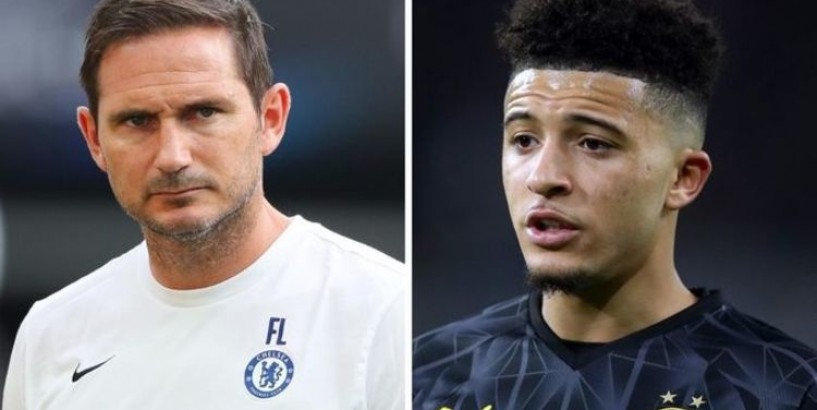 Jadon Sancho was tipped for a bright future in England before he left Manchester City for Borussia Dortmund. 0 Link copied

Jadon Sancho has established himself as one of the world's most exciting young prospects having risen to stardom at Borussia Dortmund and is set to return to England this summer with Manchester United seeking a club-record deal. The winger was long tipped for a bright future having moved from Watford to Manchester City as a teenager. Related articles

During his two years with City, Sancho quickly made a name for himself in the youth set up with excitement building over a potential academy product making the breakthrough into the first-team squad.

But Sancho grew frustrated at a lack of opportunities, forcing a move away in 2017 to Dortmund.

That trust has since paid dividends, with the 20-year-old likely to fetch a transfer fee in excess of £100m.

Chelsea may have their own Jadon Sancho situation (Image: GETTY)

United are the frontrunners for his signature, while Chelsea had also been linked with a move before securing a deal for Timo Werner.

For City, while they have won numerous titles since Sancho left, they could be made to pay for letting him leave if he returns to the Premier League at arch rivals United.

Ole Gunnar Solskjaer is slowly building a side capable of challenging at the top of the Premier League and ended the season on a 14-match unbeaten run.

Frank Lampard is also hoping to close the gap to those at the top and Chelsea have already made their intentions clear with the signings of Werner and Hakim Ziyech.

Reports suggest the club are also closing in on a deal for Kai Havertz, with a goalkeeper and a left-back also being touted as targets this summer.

It's up front though where Chelsea have already strengthened adding Werner and Ziyech, who last season scored 42 goals and provided 34 assists between them at RB Leipzig and Ajax respectively.

But Lampard will now have a decision to make heading into next season, which is scheduled to start on September 12.

Werner and Ziyech will both likely come into the starting line-up straight away, meaning the likes of Mason Mount and Tammy Abraham could be at risk of losing their regular spot in the first 11.

The 22-year-old finished ahead of the likes of Heung-min Son, Gabriel Jesus and Alexandre Lacazette in the Premier League leading scorers chart with 15 goals in just 25 starts.

But Lampard may have to try and assure Abraham the signings of Werner and Ziyech won't hamper his development at Chelsea.

Mount may be under even more pressure if Havertz signs for Chelsea.

The 21-year-old played 51 games in all competitions this past season, establishing himself as a key member of Lampard's starting line-up.

Both players seem happy at Chelsea for now and there doesn't appear to be any notion they're looking for moves away from the club.

But Chelsea boss Lampard's biggest challenge this summer may well be convincing his young English stars that Stamford Bridge is still the place for them to develop despite big money being spent. Related articles