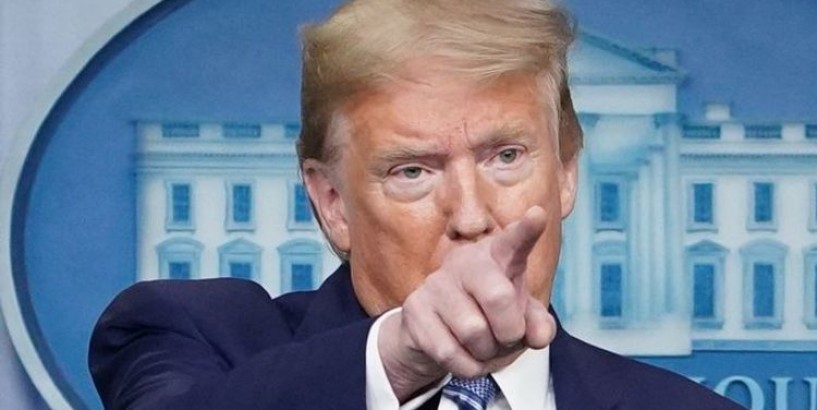 In his letter, Trump threatened to permanently stop funding of the World Health Organisation (WHO) and even reconsider membership of the US in the body over its "lack of independence" from China. Now, the Chinese Foreign ministry has responded to the threats.

Trump has vowed to reconsider the United States’ membership of the World Health Organisation (WHO) if the organisation did not commit to improvements within 30 days.

The US President said the body had shown an “alarming lack of independence” from China.

In response, Chinese Foreign ministry spokesman Zhao Lijian told reporters on Tuesday that the United States was trying to smear China and had miscalculated by trying to use China to avoid its own responsibility.

This comes after Trump posted the letter on Twitter to WHO chief Tedros Adhanom Ghebreyesus.

has accused the United States of trying to shift the blame for Washington’s own mishandling of the C (Image: GETTY) This is the letter sent to Dr. Tedros of the World Health Organization. It is self-explanatory! pic.twitter.com/pF2kzPUpDv

He said: “If the WHO does not commit to major substantive improvements within the next 30 days, I will make my temporary freeze of United States funding to the WHO permanent and reconsider our membership in the organisation.”

In his letter Trump said the only way forward for the body was if it could demonstrate independence from China.

The letter says: "It is clear the repeated missteps by you and your organisation in responding to the pandemic have been extremely costly for the world.

"The only way forward for the World Health Organisation is if it can actually demonstrate independence from China."

Tensions between the US and China have been rising with Trump becoming increasingly vocal about his mistrust of China during the coronavirus crisis.

China-US relations have also hit a low point amid a trade war, spats over civil liberties and Taiwan, and conflicts over Beijing’s territorial claims in the South China Sea.

Now, Chinese leaders will make their case for a bigger military budget as the National People’s Congress starts on Friday.

They argue that the world’s largest standing army needs more resources to cope with volatile challenges at home and overseas, but top of the list is the growing confrontation with the US.

In his letter, Trump threatened to permanently stop funding of the World Health Organisation (WHO) (Image: GETTY)

Beijing’s viewpoint is that the military threats are surfacing on its doorstep with US bombers running about 40 flights over contested areas of the South China and East China seas so far this year, or more than three times the number in the same period of 2019.

US Navy warships have sailed four “freedom of navigation operations” in the area in the same period, compared with eight in all of last year.

WHO officials denied the accusation, and claimed that China has been transparent and open about it’s COVID-19 outbreak.

Song Zhongping, a Hong Kong-based military commentator and former officer in the PLA shared his fears of a US security threat.

He said: “Beijing feels security threats posed by the US and other foreign countries are increasing, so the People’s Liberation Army wants a budget increase to support its military modernisation and combat-ready training.”

One insider has even estimated a nine percent jump.

Trump said the only way forward for the body was if it could demonstrate independence from China (Image: getty)

This is just over a third that of the $732 billion of the US.

China themselves have announced defence spending of 1.18 trillion yuan (equal to $176 billion) at the NPC in March 2019, which is the world’s second largest.

Collin Koh, a research fellow at the S. Rajaratnam School of International Studies at Singapore’s Nanyang Technological University, said the PLA and US military counterparts had communication channels.

Koh said: “Bilateral military ties (…) might not be always efficacious, but at least do serve as existing ‘pressure valves’ to forestall and potentially mitigate the risks that arise from growing tensions between Beijing and Washington.”