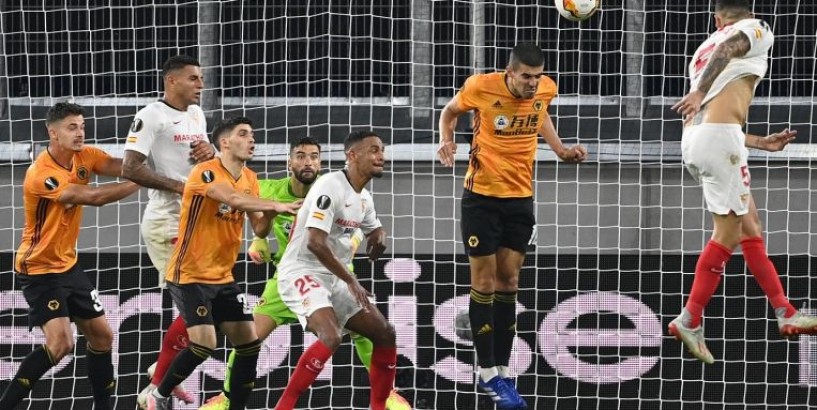 DUISBURG • Wolverhampton Wanderers manager Nuno Espirito Santo was proud of his players despite their 1-0 Europa League quarter-final defeat by Sevilla on Tuesday, and refused to blame striker Raul Jimenez for a costly first-half penalty miss.

Up against a Sevilla team who won three Europa League titles from 2014-16, Wolves gave a good account of themselves, even though they were playing in their 59th match of the season.

However, Lucas Ocampos' late header ensured their season ended 383 days after it had begun.

"Like I've said many times it's a long journey," Nuno said. "We wanted to go as far as we could. We came really close today.

"Everyone is disappointed but we should not ignore the effort of the players. It's 14 months of hard work - in the Europa League and the Premier League - and we've achieved good things.

"The disappointment cannot take away from all the good things we've been doing."

Wolves, who finished seventh in the Premier League and missed a Europa League spot for next season, had a golden chance to open the scoring at the MSV Arena but Jimenez, normally so reliable from the spot, saw his penalty saved.

"Raul is an amazing player, all the things he does for the team," Nuno added. "The work, the goals, the talent he has is amazing."

But the Portuguese also admitted that the club will need to bring in new faces in order to remain competitive.

Wolves used just 21 players in Premier League matches last season - fewer than any other team - while as many as eight players featured in at least 50 games in all competitions.

"It's a small squad and we must be really proud, but now we need to make good decisions. We need more players that can help us," Nuno said.

Sevilla have made the semi-finals of the Uefa Cup/Europa League for the seventh time - only Inter Milan have reached the same stage on more occasions - and will face Manchester United next in their last-four clash in Cologne on Sunday.

"I think we deserved the win," Sevilla manager Julen Lopetegui said. "The key was to chip, chip, chip away, have patience and wait until the right moment.

"We are going to play against Manchester United in the next match. They're the biggest team in the world but we're going to be prepared for them."

Inter face Shakhtar Donetsk, who thrashed FC Basel 4-1 on Tuesday, in the second semi-final next Monday.