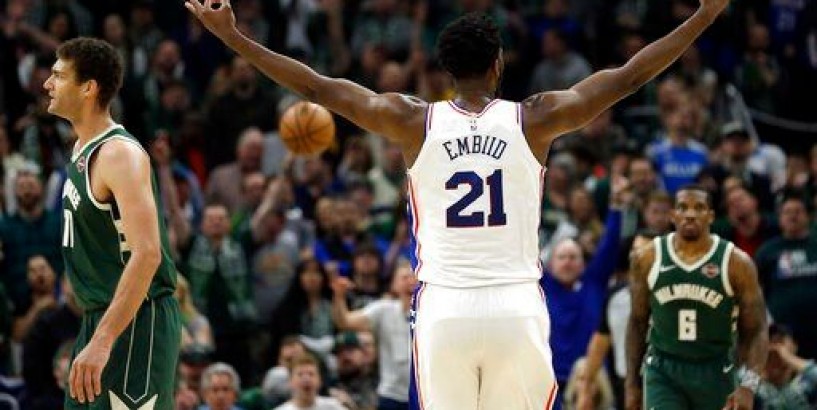 76ers' Embiid hates the Celtics, now he needs to beat them

In this era of players wanting to join up with other players, or even just being friendlier with some opponents than guys on their own teams, it's nice to know there is still some good, old-fashioned hatred in the NBA.

He hates Boston so much that he got fined $25,000 last time the 76ers played them because he was so sick of losing to the Atlantic Division foes that he lost his cool afterward.

On Wednesday, he gets his last chance during this regular season to beat Boston.

The 76ers host the Celtics, who knocked them out of the playoffs last season, spoiled their opening game in this one, and then ruined their Christmas with another nationally televised victory.

A long-time rivalry that delivered a famous fight between Hall of Famers Larry Bird and Julius Erving has become so one-sided that Embiid declared earlier this season that it wasn't even a rivalry anymore, because the Celtics always win.

Boston has won 17 of the last 19 regular-season meetings, the last of which was a 112-109 victory in Philadelphia in February. Embiid believed he'd been fouled by Al Horford in the final minute - the NBA's Last 2-Minute Report would later agree - and was fined for his public criticism of the officiating that included profanity.

He used more profanity the next night when explaining why he was so angry.

"It was against Boston again which I (expletive) hate. I'm sorry, which I hate," Embiid said. "But just emotion, losing to them once again. It was frustrating."

He might not be done seeing them after Wednesday. The teams could meet in the first round of the Eastern Conference playoffs.

The Los Angeles Lakers just lost to the team with the NBA's worst record and now face the one with the best.

To LeBron James, it doesn't really matter who they play.

The Lakers have enough of their own problems without worrying about their caliber of opponent.

The Lakers fell 124-123 to the New York Knicks on Sunday, unable to get many stops in the first quarter or make shots in the fourth. James had two shots blocked in the final minute, including his final attempt by Mario Hezonja with 2.3 seconds remaining.

Now they head to Milwaukee for a game Tuesday, hoping to end a three-game losing streak. Team LeBron beat Team Giannis in the All-Star Game, but Antetokounmpo has the better team for a real game.

James knows that. Without Brandon Ingram and Lonzo Ball, the kind of team they can put on the floor down the stretch, like in Sunday's game, just isn't good enough on most nights.

"Like I said, we couldn't close out possessions and we couldn't get enough timely buckets on the other end," James said. "But, I mean, it's been like that all year."

OTHER GAMES TO WATCH THIS WEEK:

Indiana at Portland, Monday. Nate McMillan's current team faces his old one, with both battling for home-court advantage in the first round.

Toronto at Oklahoma City, Wednesday. Opener of a home-and-home, with the rematch in Toronto on Friday.

Brooklyn at Lakers, Friday. D'Angelo Russell, the point guard Magic Johnson didn't want, is now an All-Star for the Nets.

Phoenix at Sacramento, Saturday. Luka Doncic might run away with the Rookie of the Year award, but the guys picked ahead of him, the Suns' Deandre Ayton and the Kings' Marvin Bagley III, both look good.

The road to the NBA title the last few years has gone through Oracle Arena, though this season Golden State may have to win it on the road.

Good but not great in their own building, the Warriors have the NBA's best road record and will try for what would be a third straight impressive victory on their current trip Monday when they visit San Antonio.

With Milwaukee and Toronto both owning better records, the Warriors aren't on pace to have home-court advantage in the NBA Finals for the first time in five years. Golden State is 24-10 at home, where All-Star Klay Thompson was critical of fans' enthusiasm after a recent loss to Phoenix.

But on the road, Golden State is an NBA-best 23-11 (.676 winning percentage) after victories at Houston and Oklahoma City to start this four-game trip. The Warriors have won 19 of their last 23 road games.

They should be tested Monday in San Antonio, where the Spurs have won 10 straight games. San Antonio has won eight in a row overall.