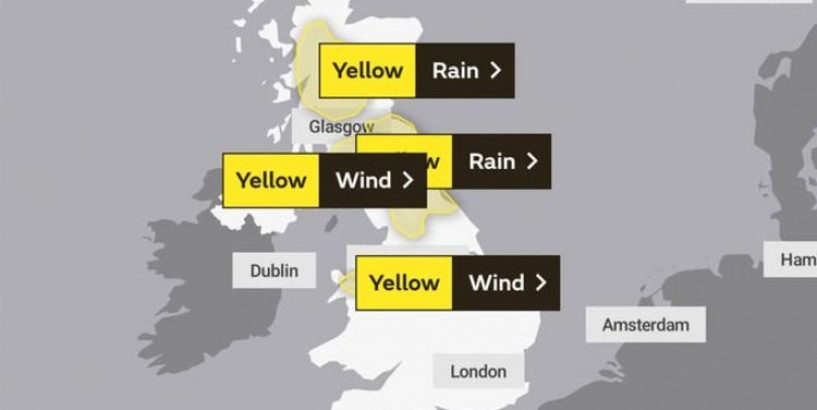 One is for winds in North Wales affecting areas such as Denbigh, Llanberis, Bangor and Colwyn Bay which may cause travel disruption. Another wind warning covers northeast England and southeast Scotland affecting places such as Middlesbrough, Carlisle, Kelso, Peebles and Edinburgh. A yellow rain warning covers a portion of south Scotland covering places such Lockerbie, Dumfries, Dalbeattie and Lanark.

“Much of southern Britain will have a dry, fine day on Saturday although you’ll notice that wind.

“It’s a wet start over southwest Scotland, wet start for Northern Ireland too, should sit a bit dry here in the afternoon, the rain working slowly into parts of northwest England, north and west Wales, but the bulk of England, Wales having a dry start.

Wind and rain warnings are in place (Image: WX CHARTS) “The rain just slowly through the day southward so northern Scotland turning a bit drier, as I mention Northern Ireland should turn a bit drier in the afternoon as well at the same time.”

“Maybe some sunny spells across East Anglia and the southeast.”

Britain is set for stormy weather (Image: GETTY) There will be rain across the north of England late on Saturday in addition to a cold front.

This is predicted to head southeast by Sunday morning.

Mr Deakin explained: “Overall Sunday is dry, a brighter day from most with lighter winds but a cooler feel.”

There will be a “dull, damp start” across East Anglia as well as a few showers across the north and eastern England as well as the west coast, sleet and snow is forecast in northern Scotland.