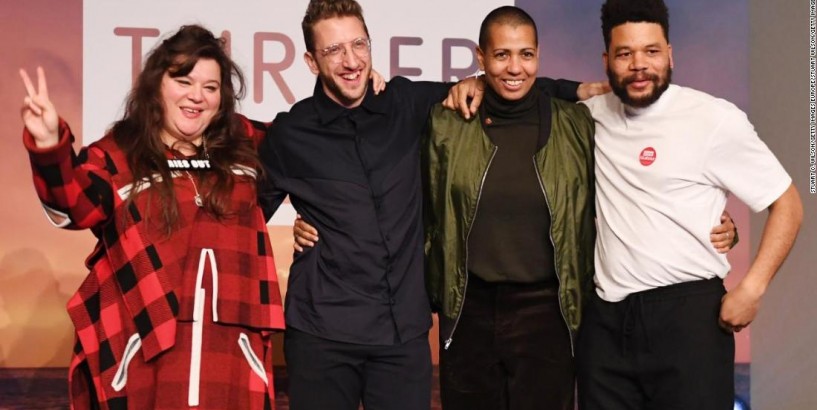 The 2019 Turner Prize has been awarded to all four of the artists nominated, after they asked to be jointly honored "at a time of political division." In a letter to the jury ahead of Tuesday's announcement, Helen Cammock, Lawrence Abu Hamdan, Oscar Murillo and Tai Shani requested that they share the prestigious UK art award "in the name of commonality, multiplicity and solidarity." In a move unprecedented in the prize's 35-year history, the judges chose to honor the request. The group will also share the £40,000 ($52,000) prize money. The four artists celebrate being announced joint winners of the 2019 Turner Prize. Credit: Stuart C. Wilson/Getty Images Europe/Stuart Wilson/Getty Images for T "The artists wanted to use the occasion of the Turner Prize to make a strong statement of community and solidarity," said award host and editor-in-chief of British Vogue, Edward Enninful, as he revealed the winners. The people making million-dollar art deals for the super rich "The jury felt such a shared commitment to urgent social and political causes should be recognized at the present time," he explained to the surprised audience in Margate, a town closely associated with English painter J. M. W. Turner, for whom the award is named. Multimedia artist Cammock used the group's acceptance speech to read out a joint statement, which included passages from their letter. Multimedia artist and joint Turner Prize winner, Helen Cammock. Credit: Stuart C. Wilson/Getty Images Europe/Stuart Wilson/Getty Images for T "At this time of political crisis in Britain and much of the world, when there is already so much that divides and isolates people and communities, we feel strongly motivated to use the occasion of the prize to make a collective statement in the name of commonality, multiplicity and solidarity -- in art as in society," she said. In a distinctly political shortlist, Jordan-born Hamadan was nominated for his video installation "Walled Unwalled" and the exhibition "Earwitness Theatre," in which former Syrian prisoners recounted their memories of life under Bashar al-Assad's regime. Cammock, meanwhile, was recognized her explorations of women's roles in the Northern Ireland civil rights movement. Multidisciplinary artist Murillo was shortlisted for his explorations of issues including labor, migration, trade and globalization, while Shani's nomination honored her creation of what award organizers described as "dark, fantastical worlds." "Collective Conscience" by winning artist Oscar Murillo. Credit: DANIEL LEAL-OLIVAS/AFP/AFP via Getty Images Yet, rather than asking to be jointly honored as individuals, the quartet decided to form a collective, which the judges then "unanimously" agreed was the winner. The four artists had not met one another before being nominated in May, though their letter speaks of a "shared ethos that runs across our otherwise very different practices." "The politics we deal with differ greatly, and for us it would feel problematic if they were pitted against each other, with the implication that one was more important, significant or more worthy of attention than the others," the artists wrote. The group used its acceptance speech to criticize the rise of the right-wing politics and the ruling Conservative Party's so-called "hostile environment" immigration policy. London-based Shani was seen wearing a necklace reading "Tories out," a reference to the UK's forthcoming general election. The speech also criticized the "competition format whose tendency is to divide and individualize." Related video: How do you fall in love with art? Jury chair and director of Tate Britain, Alex Farquharson, said in a statement that by "coming together and presenting themselves as a group," the artists "certainly gave the jury a lot to think about." 'Part of the conversation': Outspoken artist Anish Kapoor opens retrospective in Beijing "But it is very much in the spirit of these artists' work to challenge convention, to resist polarized world views, and to champion other voices," he explained. "The jury all felt that this made the collective a worthy winner of the Turner Prize." Founded in 1984, the Turner Prize is awarded annually to a UK-based artist born, living or working in Britain. Previous winners have included Damien Hirst, Tracey Emin, sculptor Anish Kapoor and potter Grayson Perry. Last year's honor went to Glasgow-based artist Charlotte Prodger for a pair of autobiographical films, one of which was shot entirely on an iPhone. An installation view of "DC: Semiramis," by Tai Shani. Credit: DANIEL LEAL-OLIVAS/AFP/AFP via Getty Images While the award has previously been won by a group (architecture collective Assemble in 2015 ) and a duo (Gilbert and George in 1986), it has never been jointly awarded to multiple nominees. The recipient of 2016's prize, Helen Marten, announced that she would share the prize money with her fellow finalists, though she was considered the only winner. Tuesday's announcement comes just months after one of literature's most important accolades, the Booker Prize, was shared for only the third time in its 50-year history. In October, it was announced that Margaret Atwood and Bernardine Evaristo, author of "Girl, Woman, Other," would split the coveted prize.